I've been taggied for a kool new meme by my bee-yootiful sweetie girlfurr-iend Ariel and by my handsum furr-iend Ramses. And I also wanna thank efurrykitty for your nice words about the spat here yesterday. Both Brainball and Marilyn are feelin' bettur today and they've been snoozin' a lot -- ackshually, all of us Ballicai have been snoozin' a lot today cuz we were all kinda hyper yesterday. Today's been a great day to RELAX. 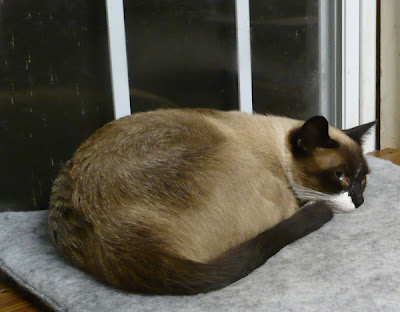 What were you doing 10 years ago?

10 years ago??? Wowie, that's a long, loooooooong time ago... wuz there dinosauries on the earth way back then??? (oh crud, bettur not let Marilyn hear me say that cuz she'z older than 10...)


What were you doing 1 year ago?

Well, since I'm just ofur a year old, I woulda been an itty bitty kitten. I didn't live with Momma and Daddy and Brainball and Marilyn and Dorydoo yet, since I showed up at Momma and Daddy's back porchie late last year as a straykitty.


Five songs to which you know all the lyrics:

"Run to the Hills" by Iron Maidden

"Come On Feel the NOIZE" by Twisted Sistur


Five things you would do if you were a millionaire:

Build a bee-yootiful kitty housie for me and Ariel, it would have catwalkies and nooks and krannies to ecksplore and all kindsa kool places to snooze and snuggle in

Buy a Little Mao CrotchRocket (motorcycle) so I could spazz around the housie even FASTUR!

Messin' with my sisturs when they're inna potty

EVIL COFFEE STIRRERS!!!! kill, kill, KILL!
The red dot thingie! KILL!
Toilet paper cores
Lids off plastic bottles
My oingy boingy monkey that hangies from the doorframe (Momma likes to sing to me: "A Mao and his Monkey, and a Monkey and his Mao")

Well, I'm not sure who's been taggied and who hasn't, so I'll just say anykitty who wants to play! And as alwayz, love and kissies and snugglies to my Ariel.
MAOed by MaoMao at 12:01 AM

we didnts know yu is a heavy metal rocker! no wonder yu goes a squillion miles an hour thru the house!

"Wow" we really do have alot in common.I'm so happy you found a great home.Your family sounds wonderful...
Love and lots of kisses Your Ariel

I forgot I love the lids on plastic bottles, too - heehee, I hide them from mom!!!

You look really relaxed today. I'm glad everything settled down again. I like your answers to the meme. A heavy metal rockin' kitty, eh? I can just see you with your air guitar.

Wow, heavy metal? You're a cool dude. Or do they say that these days...I can't keep up, human language is so hard to understand sometimes. But I like your meme. You did good.

You have to forgive my bean. She forgot who she was bloggin' there for a minute. So, yeah, I liked your meme too...hugs...from Gretchen. Mom, gets some sleep!

I enjoyed reading your answers, Mao! :) You are a real rockin' kitty! I like what you would do if you were a millionaire!

I think I'll have to make Mummy get one of those red dot thingies, they sound really cool! :)

You are always the funniest cat MaoMao ~ those are some lovely facts :)

Mao! I found where Mombean has some HUGE coffee stirrie things! I'm gonna sneak a picture of them for you, these things are massive!

Mao, you are so cool, I think a motorcycle would be perfect for you! TNT, you're dynamite, OY, OY, OY!

Those are great answers. It was very nice to learn more about you.

Glad to hear your sisfurs are behaving themselves today : )

yeah, cheddar cheezies are so good yum. Wowie so you are a youngster just like Dragonheart, no wonder you are such a wild monkey, er kitty

I think because of you that I would be afraid of the evil coffee stirrers if I ever saw one in person. I will ask your help if I ever encounter one.

Yes the dishwasher is a fun place for kitty cats. Especially since no one here knows how to rinse a plate, we have to help. Hehehe

Just stopping in to see your adorable kitty self.

MaoMao, that was a great meme! We loved your responses. We particularly like thinking about you spazzing around on a crotch rocket. We hope you hit the lotto soon so we can see it!
Purrs,
Mr. Chen & Ollie

I believe you like your toys very very much~!