My beeyootiful sweetiepie Ariel taggied me fur the Quirk Meme! Oh, this will be fun cuz I'm a quirky feller.

Here are the rulz fur the meme:

* Link to the one who tagged you.

* Tell about 6 unspectacular quirks of yours.

* Leave a comment on their blog to let them know they've been tagged.

1. I love alla my sibs, but I'm speshully close to Brainball. He's not just my big bruther, he's my bestest furriend inna whole wide wurld. And he's my mentor and he's so much fun to rassle with and play with. He's also comfycozy to snuggle and snooze with, too. Here he is, sharin his shirt with me. 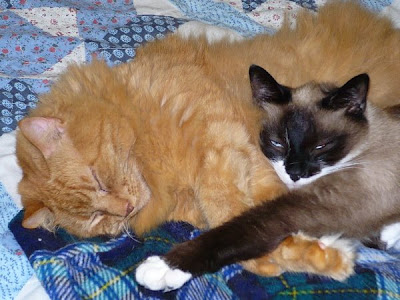 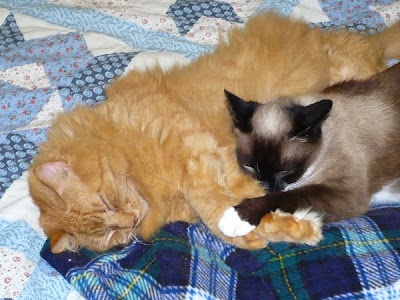 4.I love love love watur! Brainball and Dorydoo like drinkin watur outta the sinkie, but they don't like gettin it on their furs. Marilyn won't efun go in the sinkie fur a drink. But I get inna sinkies -- both inna baffroom and the kitchun -- to PLAY with the watur. I get down inna sinkie and try to WHAP it. Sometimes I get inna toilet cuz it just drives me crazy wunnerin where alla that watur goes when the beans flush!

5. Efun though I MAO a lot, I have a furry quiet purr. I purr, but you've gotta be superduper close to me to hear.

6. I've lived with Momma and Daddy and the othur Ballicai fur almost a year and a half now, and not in alla the time Momma and Daddy have known me have I efur HISSED. I nefur get mad at anykitty or anyone.

I think lotsa kitties have already done this meme, but if you haven't, konsidur yurself taggied!
MAOed by MaoMao at 12:01 AM

I do not see it as quirky to talk a lot. You just have a lot to say!

You wouldn't be a meezer if you didn't mao a lot. We don't hiss a lot, but we have been hissing at the other woofie who lives with us (not Camie) quite a bit. She won't leave us alone.

Thank you for sharing the quirks with us. It was great to know you better. The only time I ever hiss is when I visit the V.E.T.

Those were neato quirks Mao :) It must be funny to hear a cat bark,heeheehee
I think Brainball is a cool cat too . You all are :)
Purrs Mickey

You sound like such a nice guy, Mao, quirks and all!

Hehe we never heard a cat bark. Are you sure you're not part woofie? We like the pikchur of you snuggled wiv Brainball. Mum sez Brainball has the same type of face as Eric. She duzn't mean he looks like him, but it is a big furrendly old fashioned type of face.

I would love to hear you bark!!

I am jealous of you there cuddling with my twinsy, Brainball. I want to be there snugglin too.

I am working on my quirky list for tomorrow.

Purrs to you all!

MaoMao you are an awesome pawesome kitty ~ and so are the rest of ballicai ~ thanks alot for displaying the ngs graphic on your bloggie and supporting the good cause :)

Mao, you are about the happiest boy I know!

Oh you look so comfortable!!!

Sassy talks all the time too!

I think it's interesting that you MAO loudly and purr softly...

Mom says she feels like she knows you very well, Mao. Your easy-going purrsonality is like Grayson - he loves everyone! Your MAOS are like me - I have lots to say, too!

That's some great quirky stuff about you Mao! You and Brainball look very comfy snoozing on his shirt.

Aww, these are wonderful snuggle photos of you and Brainball. And you are barking? That's kind of funny :-) I would really love to hear and see this.

I love reading your answers.The photos of you and Brainball are so sweet and precious.I love the closeness you two share.I can't believe you like to play with water
your very brave to get in the sink.
I only go in it to sleep.Today is mom's birthday.Grandma and Grandpa will be coming over.Grandpa loves to cook so he's going to make dinner. You can teleport over if you want for a snuggle and some Ham....Love Ya Your Ariel

Mao Mao I know that you are the biggest character! So funny!!! I hiss all the time but then I am not nearly so good at comedy as you! You have the perfect comedic face, i told you that before! x

Hey, Speedy's neffur hissed either! Must be a mancat thing. Now, dat barking and jumping thing...dat's just you.

Oh, we liked reading all those things about you Mao Mao! We have an awardie for all you Ballicai! Come see!
Purrs,
Mr. Chen & Ollie

um, you bark and like water....i know a couple of woofies like that. do you think you're part woofie? lotsa woofies are cool!
now Bendrix is thinking evil scientist thoughts. think of how cool a cat and woofie mix would be...

First..., what a GREAT, BEAUTIFUL photos of you and Brainball!!!

And what a great talker you are, hahaha. Must be a meezer thing as my younger sister is doing that too.

Oh Mao, I was so glad to read we have something in common -- I knew I was not the only cat crazy of water! And thinking of it... I never hissed too...:-)

Headbutts to you Ballicia and a (((hug))) to Dorydoo, I know she misses her burp buddy as much as I miss my brother-in-law.

I think you're weawwy sweet. You never hiss! I do that EVEWYDAY with That Thing awound here - he dwives me cwazy!

MaoMao, you are such a wonderful boy. You are a lot like Caesar... and me too. I am also VERY vocal. Caesar used to bark, he was so adorrrable.

I love these pictures of you with your buddy Brainball. It is so wonderful. I am so glad that you have him to look up to and snuggle with and just do guy stuff!

You and I are alike in that we both talk a lot and we both never hiss! My mom thought I was part meezer when she adopted me...what you do you think? I think my real cat mom ran around a lot with a lot of different mancats. You look so great together with Brainball!
--JB

You have a lot of interesting quirks, Chairman Mao. And you're a very sweet mancat for never hissing and loving every one :-)