Dorydoo here, the Ballicus Frootbat! Am I looking frootbatty today? I hope so! I love being Mom's little Frootbat. 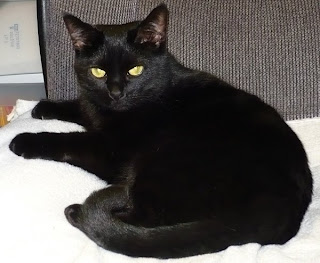 My fluffy-sister-cousin Gretchen tagged me for the Book Meme, which is really cool because I haven't played yet. Here are the rules:

Pick up the nearest book.
Open to page 123
Find the fifth sentence.
Post the next three sentences.
Tag five people and post a comment to Mickey once you have posted it.

I'm near Mom's book shelves, so there are a great many books which are close to me. I'm a logical, methodical kitty with great scientific curiosity, and Mom says I'm a Kitty Genius. So I'll pick this book:

Theories of Everything -- the Quest for Ultimate Explanation by John D. Barrow.

"Sir Arthur Eddington was the greatest astrophysicist of the pre-World War II era. He had founded the systematic study of the structure of stars, significantly furthered our understanding of the motions of stars in the Milky Way, and provided his contemporaries with the finest exposition of Einstein's new theory of gravitation, while playing a key role in its experimental confirmation. Eddington was also a Quaker of deep conviction and it is interesting to wonder how the Quaker notion of the "inner light" may have played some role in his scientific thinking."

I love Mom's science books. Though she's a novelist and a musician, she's also an armchair science nerd, and she has all kinds of cool books on astronomy and cosmology and theoretical physics. She's fascinated by all of it, and I am, too.

Mom has two kitty daughters, me and Marilyn, and while Marilyn inherited Mom's writerly tendencies, I inherited her passion for science. How lucky am I? *GRIN!*

For some time, I've been working on an antigravity device which I hope will let me to go to the Moon. Maybe even to Mars! My antigravity device works well -- after all, I can get wayyyyyy higher up in the house than any of the other Ballicai, but it hasn't even gotten me into low Earth orbit yet, much less to the Moon or to Mars. Oh well. I'll keep working on it. Earl, cutiepie, would you like to go to Mars with me when my antigrav device is ready? *googly eyes*

I only wish there were a college that admitted cats for advanced studies in physics. I would be SO THERE!


I don't know who has played the Book Meme and who hasn't. So I'll leave this tag open for anykitty who wants to play!

We Ballicai are behind on our visiting -- we're sorry about that! Mom's going to help us catch up as soon as she can.
MAOed by Dorydoo at 12:01 AM

You are very cute, Dorydoo. Your ears still look pretty small to us though! :) Maybe that's just because ours are so big. ;)

Doryddo, you are very cute, but not especially Frootbat! Perhaps you can make your antigrav invention make your ears a bit more Frootbatty!

Great meme too but we didn't understand too much of it! :)

You are a very beautiful frootbat.
Your ears are perky and shapely!

Dorydoo, you're such a brain! I love it-my mom reads articles from Smithsonian magazine to me about particle physics and black holes-and she has a real thing for those black holes-she even did a science project on them when she was in the 7th grade-eons ago, when black holes were first discovered!

Mom::Angus! Not exactly! I'm not that old!

You look great as a frootbat Dorydoo!

An anti gravity device would be great. If anycat can do it you can!

Dorydoo, you have such lovely froot bat ears. I would love to go to Mars with you. That would be awesome!

Lovely photo as always! Your human is clearly very very intelligent. The same cannot be said of mine. She wouldn't even be able to understand cat blogs were it not for my input.

Congratulations on having such an intelligent slave! x

You certainly are one cute frootbat!

You're a cute Frootbat Dorydoo.

Cutie froobat Dorydoo! And we loves your pretty eyes!
Purrs and headbutts,
Sabrina, Sam and Simon

Oh, I need an antigravity device!

I love your Frootbat look Dorydoo, you are just so darn cute!

Oh, Dorydoo, that was nice of you to play the book game. I do think it has been around to just about everykitty. But I loved your choice. You could be the first cat to get a Noble Prize for your anti-gravity device. There should be more female felines in the field of science.

Wow! You are a very intelligent cat, Dorydoo! I didn't know that about you. Good luck working on your antigravity device. I'm sure if any cat can make one to get to the moon, it's you!