How I Got My Name Meme!

My sisfur Marilyn taggied me fur the How I Got My Name Meme! She usually don't tag me fur memes, but I insisted cuz this one looked like so much fun. I told her if she don't tag me, I'll drive her crazy next time she's inna litterboxie!

I know it sounds like I'm named aftur this fella:

But that ain't quite it, ecksept in a tongue-in-cheeky kind of way. Here's why I'm Chairman Mao (Chair + Man + Mao, but I'm not MAOing in this pickshure, I'm sleepin'): 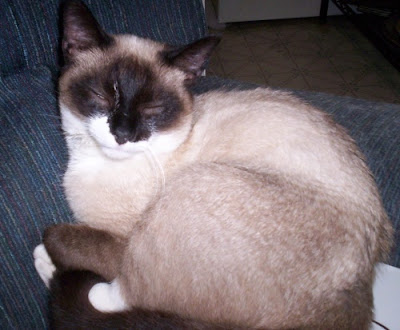 It didn't take Momma and Daddy long to learn these things about me. I showed up as a stray kitty, and before I was brought into the housie, I hung around with Daddy in his garage and helped him do manly things. I always took his chair. I had my walnuts back then, so it was klear I was a mancat. And I said MAO MAO MAO MAO MAO MAO MAO alla time.

So, takin' note of all these things, Momma sez, "He's Chairman Mao."

So that was that, hehehe. And furry soon aftur, I was tooked to the vet and I lost my walnuts, but then I got to come inside to live with my Momma and Daddy.... and three SISFURS!

I'm gonna tag my sweetiepie Ariel and my buddy Henry Helton.
MAOed by MaoMao at 12:01 AM

Labels: How I Got My Name Meme, love and kissies to my sweetie Ariel

This is a very interesting Meme and I love your answer. I just got mom to finish the first one.Now we're getting ready for bed hopefully she'll be able to sleep.If she's up to it tomorrow we'll work on this one.Good night My Sweetie and Sweet Dreams Love Ya Ariel

This is very interesting. we knew it had some relationship but we didnot know for sure.... hmmmm

You are very handsome in this picture Mao!

Thanks for the tag!

Wowww, I can see that is why your name coming from. Very Interesting~! Sleeping on the chair is very good choice~!

I like how you got your name, Mao. Better than that bean picture.

I enjoyed learning how you acquired your name, Mao. :)

We loves that name, and how yous gots it...even ifs you had to lose the walnuts.
ps. we sees in that pictures you haves the same little bits of white on your nose as Napoleon has, we thinks we must be long losted family.

hey mao mao, you totally suit your name! I am spazzin out like you today on my blog he he x

Mao, you really are a Chair Man!

That is a great name you have! Really fitting you!

Chairman Mao... have you Siamese in you? You look like you do... wow SO MANY CAT BLOGS... I've been springing from one to the next... All these kitty commenters you got as well! I am a keeper of HAMSTERS so I'm feeling very paranoid on their behalf in all this feline company ... you can come by if you like just promise not to eat them or anything:
http://gledwood2.blogspot.com is the place to be - my daily confessional!
OK take it easy
& all the best 2u
from
Gledwood
"vol 2" ...

I had thought it was a tribute to your Asian ancestry (being Siamese) originally but then you mentioned that you always go Mao Mao Mao and I thought ! AHA! That's why he's Chairman Mao--although I had no idea about the rest! Nice name!

what a great story. i'm glad you found your forever family. bummer about those walnuts huh? i guess i don't miss mine to much.
you look like you're very comfy there.
when you wake up, will you stop by my bloggy and help me pick a photo for my very own stamp?

That waa a really neat way to get a name, Mao Mao. I like it a lot.

That's a great story about how you got your name, Mao!

that's a really cute tale Mao! i can;t believe you used to be stray! you are so cute! xxxx

That's a neat story. Everytime Mom clicks on your bloggie, she says MAOMAOMAO. hee hee I'm sorry about your walnuts. Mine went missing, too. :(