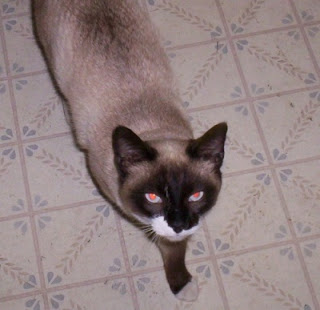 Thought I'd post some pictures of me and my sisters that Momma took tonight. And since we're the Imperial Order of Indoor Ballicai, I'll tell you what our secret Ballicus names are. Aren't you excited? You see, there's this poet fella, T.S. Eliot, who Momma likes a lot, and he wrote some cool poems about Ballicai (Ballicai's what kitties are called in our house). And the poet fella said:

The Naming of Cats is a difficult matter,
It isn't just one of your holiday games;
You may think at first I'm as mad as a hatter
When I tell you, a cat must have THREE DIFFERENT NAMES.

Well, I'm here to tell you that all us members of the Imperial Order of Indoor Ballicai have not three but FOUR different names: our nicknames, our name-names, our Ballicus names, and our super-secret names (which I guess aren't so super-secret since I'm posting 'em on this bloggie, huh?).

I'm a happy kittyboy to be able to say after being in my new home for over two weeks, I'm gettin' along with my kittysisters better! Me and C.J. have gotten along since the first day we were introduced, but things with Marilyn and Dorydoo were tougher: Marilyn's the oldest Ballicus around here and she's kinda grouchy with us others, and Dorydoo used to be the young'un before I came along, only she's not anymore and that kinda teed her off. But things are smoothing out. Dorydoo even came close to sniffing my butt today, and as all us kitties know, butt sniffing's a mighty fine thing.

So here we are, my sisters and me and our names (well, some of the nicknames -- actually we have lots more of those). 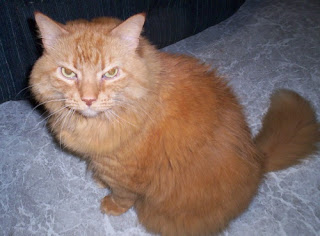 This is the middle sister, Calamity Jane. She's the Alpha Cat, the Ruler of the Imperial Order of Indoor Ballicai, and she's real big, too, so I'm glad she likes me. She'll turn nine this year, but she seems a lot younger since she's lived with Dorydoo for over two years and Momma says Dorydoo keeps Calamity Jane on her toes. Me and C.J. get along real good. We butt-sniff, nose-kiss, and play chase. Her nickname's C.J., but everybody calls her Brainball (that's her Ballicus name -- all Ballicus names end in "ball") 'cause she's a fuzzball with eyes. Her super-secret name is Doodidimous. Don't you think she looks like a Doodidimous? 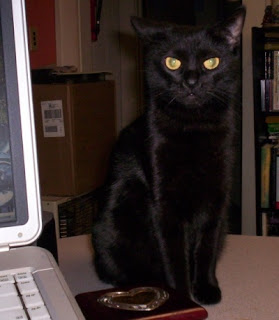 This is Dora the Explorer, the youngest sister. She's real feisty and intense and didn't like me much when I first came because even though I'd lost my nuts and couldn't find 'em anywhere, I still smelled like a boy, and she thought I'd give her boy cooties. She's simmering down, though. And I think we'll make good friends once she gets used to me not smellin' funny. She's two and a half years old. Everybody calls her Dorydoo, and her Ballicus name is Blackball. And her super-secret name is Shenkaseia. She's the most graceful kitty I ever met and climbs like a monkeyweasel. 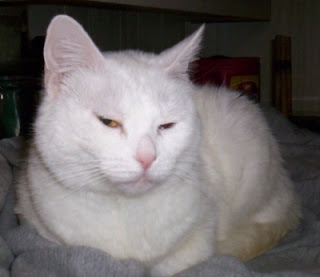 This is Marilyn MonREOW, the oldest sister. She showed up as a stray, like me, and Momma and Daddy made her an indoor Ballicus. The vetperson told 'em Marilyn is about twelve years old, but she's real spry and can jump anywhere she wants to, even on top of the fridge. She's real sweet with Momma and Daddy but is grouchy with us kitties. She doesn' t pick fights with us, though. She just hisses and spews a little. She likes me better than she likes the girls. Her nickname is Marilyn, her Ballicus name is Eyeball ('cause of her neat-o different colored eyes), and her super-secret name is Duallipot (Momma and Daddy call her "Dually"). 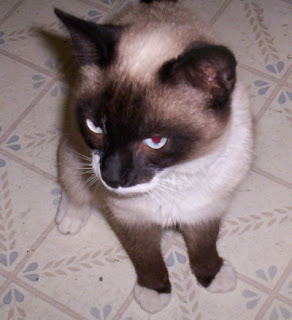 And here's me, Chairman Mao. I'm a mostly-Siamese kittyboy who showed up stray, and Momma and Daddy brought me inside to become an Indoor Ballicus. I love it in here. I love other kitties and I love people. I love pretty much everybodies. I'm the youngest kitty in here in addition to being the only boy -- the vetperson who stole my nuts said I'm about 8-9 months old. Anyhow, my nickname is Maoknocker, my Ballicus name is Maoball, and my super-secret name is Chang Lao (but Momma and Daddy sometimes call me Ho Chi Minh because it looks like I've got a little goatee on my chin).
MAOed by MaoMao at 11:15 PM

"hmmmm ... she is a beautiful Whitester!"

Wowy wow! We wonder if we gots different names too...we will haf to investigate!

Thanks for introducing all of your feline family and for telling us your names. :) I have a whole bunch of names too.

Those are some great secret names you all have! I like learning all about you. And I am very happy that you are getting along with all the other Ballicai.

That's a wholelottanames!!! How do you know which one you are??? we've learned to come when Mom calls any one of us...cause she mixes every one up.

aww, you is all so purrty. it's nice to see a snowshoe meezer - your feets is opposite of our feets!!!

Hi there, everybodies! Thank you so much for comin' and talkin' to me -- youkitties are great, purr.

Yeah, all our names can get confusing sometimes -- we are four Ballicai, but probably we got us about forty names when you add 'em all up.

I'll have to do a post about Marilyn MonREOW! Just today Momma and Daddy were jokin' around about if us kitties wore clothes they'd get a sparkly, sequined dress for Marilyn. They also joke about her singin' "I Wanna Be Loved By You" when she's cuddlin'. She's a glamour girl. Dorydoo and Brainball are both more tomboyish girlkitties. Or tomcattish girl kitties? No, wait, they can't be tomcattish 'cause they never had any nuts.

We like T.S.Eliot too. Dat's where G.T. got his name. Growl Tiger. Yup.

We like hearing about yoo all. our mum has got the TS Elliott book too, and she has read it to us. We haf got sekrit names, but we hafn't efun told our beans what they are

Purrs to all your Forty Paws kitties and to you guys, Eric and Flynn!