My friends Kimo and Sabi made a great point, commenting on Momma's writing bloggie. Momma posted a bunch of famous paintings as part of her Thursday Thirteen. Well, Kimo and Sabi asked, where are the kitties? That was a dang good question!

So I asked Momma, where are the kitties? Well, she found me some paintings with kitties in them so I can post 'em here on MY bloggie.

This one was painted by a Japanese artist in 1850, couldn't find out who, but that kitty reminds me of my big, orange, fuzzy sister Brainball, especially her face when she's gettin' skritches. But I don't know what that big ol' fuzzy thing to the right is. Looks like a feather duster. Maybe the kitty in the picture isn't as ticklish as I am. 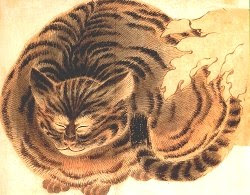 This one's by Renoir, Momma said. It's called Julie Manet with Cat. I asked Momma, shoudn't the kitty have a name, too? Momma said she was sure the kitty has a name but that maybe the girl, Julie, didn't tell the painter guy, Renoir, what the kitty's name is. Ptooey. That kitty should hock a hairball on that girl's shoe, don't you think? I'll get Brainball to do it. She's a hairball with legs. 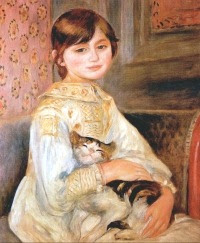 This one's by a painter guy named Gauguin, and it's called Eiaha Ohipa. I have no idea what that means except it sounds like one of the weird sounds Dorydoo makes when she's spazzin' out. The kitty in the picture looks comfy, though. She reminds me of Marilyn MonREOW when she's nappin'. 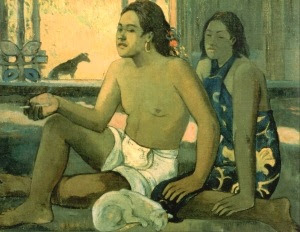 Momma liked this one for its colors, but I think that kitty looks just plumb weird, like he's howlin' at the moon. Do any of you kitties howl at the moon? I don't. I MAO at the moon if I can see it through the window, but that's different 'cause I MAO at lots of stuff, bein' a Meezer. MAOin' is more dignified than howlin'. Everykitty knows that. Anyhow, I reckon the kitty's howlin' at those humans flyin' through the air, and maybe if I saw humans flyin', I'd howl, too. This painting's by a guy named Chagall, and it's called Paris Through the Window. 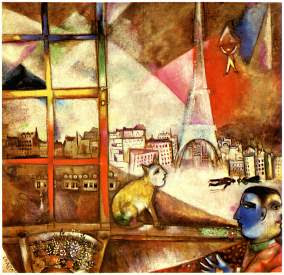 i wuz tryin to find sumthin by da artist known az "will barnet" we hav a verree nice pikshur uv a lady in bed reedin wid a wite cat ... mi mom luvz it so much. she looked all over noo york for it!
luv--o'jete

I reeely like that last pikcher. I howl sumtimes, moon or no moon!

I love that last picture! The colours are beautiful, it would look nice on the wall. :)

Those are great pictures! But you are right, the cat in that last picture looks weird! The colours are pretty though.

Art just isn't as impressive when there lacks a presence of a cat...
nuff' said...

I like the last picture best too! It looks like something my Mommie would buy, she likes weird-looking art! She has a painting of a man wearing a bumble-bee suit!

Furry good job finding cat art! Our favorite cat artist is a dude named John Sumner - he has a gallery in Sonoma, CA. Here is the linky to his stuff:
http://www.johnsumner.com
When you get to the website, go to the galleries - he has furry funny paintings of kitties and woofies!

Hiya everybodies! Thanks for commenting, and purrs all around. And Kimo and Sabi, wowie -- I love the John Sumner paintings! They're so colorful and cute.