Sumetimes I don't understand my sisfur, Dorydoo. Me and her are furry good furriends. We love to play chase and we love to rassle, and sometimes we sleep and snuggle togethur. But still, there are times when she gets crabby with me! She SQUEEKS, then she WHAPS me. Lookit this, just lookit:

Maybe she was lookin fur a good book to read and was annoyed that I gotted in her way. Ya think?

But Dorydoo nefur, efur, efur gets crabby with Brainball, our big bruther and the Alpha Cat of us Ballicai. She adores him. Here they are together. Does she look one bit crabby to you in this video? No! She loves both me and Brainball, but she only gets crabby with me. No fair.

Anyhows, my beeyootiful Sweetiepie Ariel gaved me the sweetest awardie today. Here's what she says about it:

"I was talking to mom recently about creating an award. Everyone knows someone who goes beyond. A person who always helps others, always has a kind word, a person with a heart of gold. So I told mom I wanted to make an award we could give to those we think deserve it."

I am so happy and honored that I'm spazzin all ofur the housie! Thankies so much, Sweetiepie. You have a heart of gold, and you're beeyootiful inside and out, and I'm proud to have you as my gurlkittyfurriend! 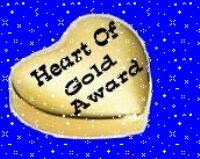 I'm gonna pass the awardie on to The Cat Realm, the Furry Kids, the Big Piney Woods Cats, Jeter Harris, Mike the Mysterious, and Stormie the Furry Fighter.

1. Pick up the nearest book.

Hmmm, since alla us Ballicai are in diffrunt places right now and there's books all ofur the housie, any of 'em kould be a kandidate fur this meme. But since I'm the one who's postin, the book closest to me is this one:

The Autobiography of Benjamin Franklin. Hmmm. I've heard of that dood. He flewed a kite durin a thunderboomer with elecktricity and didn't get elecktrocuted. Wowie. He must be furry smart!

"About the Year 1734, there arrived among us from Ireland, a young Presbyterian Preacher named Hemphill, who delivered with a good Voice, and apparently extempore, most excellent Discourses, which drew together considerable Numbers of different Persuasions, who join'd in admiring them. Among the rest I became one of his constant Hearers, his Sermons pleasing me, as they had little of the dogmatical kind, but inculcated strongly the Practice of Virtue, or what in the religious Stile are called Good Works. Those however, of our Congregation, who considered themselves as orthodox Presbyterians, disapprov'd his Doctrine, and were join'd by most of the old Clergy, who arraign'd him of Heterodoxy before the Synod, in order to have him silenc'd."

ACKETY ACK ACK ACK -- I don't have the froggiest idea what he's talkin about. But fur sure Benjamin Franklin sounds like a furry smart man bekause not only does he write great big long sentences with great big long wurdies, but he knows how to spell 'em all, too.

Never mind, I think you are such a gentlemancat since you don't whap back.

Congratulations to your award and thank you so much, Chairman Mao, for passing it on to us!!!! That is so sweet of you!
Mrs. OZ agrees that Dorydoo was just looking for a good book and didn't want to be disturbed...
Karl

That was so not nice of Dorydoo to swat you the way she did It must be cabin fever.

Mike will be thrilled with his Heart of Gold Award.

Thanks for thinking of him.

Oah, poor Mao!!!!
Let me give you a big hug!!!!
I think Dorydoo just want to concerntrate on thinking,
just seeing handsome you makes her forget that important thought,
she might too shy to say she forget so she just whapp, but I am sure she is not pupose!!!!

Dorydoo whapped you good, MaoMao. Maybe she didn't want to share her bookcase place. She does like to cuddle with Brainball, though. Congratulations on your award. I think all you Ballicai have hearts of gold. I have read Benjamin Franklin's autobiography and it is a very interesting book.

Both of those videos are very cute. Siblings, even when they are best friends, occasionally whap each other.

Congratulations on your award!

I'm sure Dorydoo was just looking for a book maybe to do this meme.I whap
mom on her head all the time.Yet I promise I would never whap you(kiss).
I'm so glad you like the award your so sweet and kind and you picked great kitty's to pass it too.I love you bunchies...Your Ariel

Concatulations on the award!! You are a gentlecat. We luvs the 'brary and we don't like to be disturbed but would neffer whap. Ariel is lucky to have such a great boyfriend cat. Meow to you from us!

It is very sweet of you not to get crabby and whap back! yOu are a lovetiger for sure MaoMao

congratulations on this cool awardie
I got one too... I will post it tomorrow

Sumtimes sisfurs are so hard to figure owt!

Dorydoo... a sister who knows how to work it! You have to keep those boys on their toes! Great going!
Purrs, Shade

Mao, of course she doesn't whap Brainball, how could she? Look at him! Hee Hee!

For some reason, Dorydoo appears to have more respect for Brainball. Maybe you should be a bit more aggressive with her? She seems to think she can boss you around.

Congratulations on your wonderful award!

PS: I don't understand the part quoted from that book either.

You're right, Mao! That Franklin guy does sound very smart. Congratulations on your award . . . and I'm surprised at Dorydoo!

Yeah sisfurs is hard to figger out. I was all snuggled on da bed next to Zippy for a couple hours and all of a sudden she jumped up, whapped me on da butt and ran off...Mom sed maybe I started snoring, but dat's no excuse for whapping my butt.~Speedy

I think Dorydoo was just playing with you - she didn't whap you hard - if she was mad she would have really whapped you.

Congratulations on your award!

I don't understand sisters either. Tazo whaps me and screams and gets me in trouble, but then she'll rub and purr all over Titus. Girls

hip and a hart uv gold?
mao ... yer da gratest!
i had to giv mi auntie bee a tootorial on joba chamberlain today ... but tomorrow i will be posting abowt deze grate awardz.
thank u.
luv--jh

I'm sorry that Dorydoo whaps you but that sisters for you. Sometimes Trixie likes to whap Bounce too for no good reason!

Sorry about gettin' whapped Mao. But to tell the truth, sometimes chicks get grumpy. I don't know why. If you wanna hang here with me and KidBean I promise there won't be any whapping.

Congrats on your award. I still have to do the book meme.....my mom better help me soon!
--JB

Mao, I have the same problem with my sister, Tipper. Sometimes she's nice to me and cleans my ears and other times she jumps on me and bites!

Chairman Mao, you showed great catmanship by not swating back at Dorydoo. While it wasn't very nice of Dorydoo to swat at you, the fact that you refuse to swat back speaks louder than words.

That was nice of you to not swat Dorydoo back. Here, there are always spitting and hissing fights if somebody whaps somebody else. Oy!

Concatulations on your award!

catgratz on your award...your words are truly kind reflect who you are:)

we're amazed by the book you chose;)

and, about Dorydoo, well, we guess, sister will always be sister, hmmmm....

aw, i think sometimes sisters can be a little cranky. mommy said she got cranky with her little brother sometimes. you were very nice not to whap back.

congrats on your great award! you certainly deserve it!

well thats just inverse favouritism. I can't believe your sister snuggles with brainball but swipes at you! What on earth is she thinking? Mao Mao, it's time for revenge. Seriously. x

sisfurs. I had one of dem. She's at mommeh's werk right now getting her hoo-hee-ectomy.

Hmm, could it be that Dorydoo wants to be the Beta? Just tell her that it's not going to happen.

I get the same trubble wiv Flynn. Yooshully he purrs and cuddles wiv me, but sumtimes he hisses at me furr no reason, and he whaps me too

hello my lovely Mao Mao :)
thank you for my awardie, Meowmie thought she had helped me say thank you yesterday but I fink she is losing her mind cos she plainly didn't!!!