The Ballicus Mom here. As readers of the Ballicus Blog know, Brainball is a big, floofy cat. He's prone to getting mats on his back, near the base of his tail. It's the only place he gets them. In the past, we've cut his mats out -- we can easily do that with our clippers, and he hasn't minded.

Well, last night, we cut a mat off Brainball which turned out to be a lot bigger than what we'd thought. He now has a big shaved spot on his back, near the base of his tail. 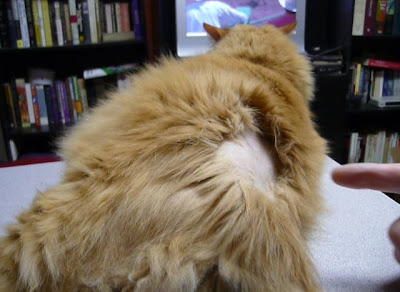 He's had shaved spots there in the past, but this one is bigger, and it's bothering him. He's doing a lot of hissing (very unlike Brainball -- he's not a hissy kitty) -- not at the other Ballicai but at us (hubby and me). Can't say I blame the big ol' boy.

We thought that perhaps the hair over the top of his bald spot was tickling him, aggravating him; that patch of skin is probably sore and tender because of the mat that was there. To try to bring him relief from the tickling, we trimmed back some of the floof over his bald spot, and then we thought perhaps bag balm might soothe his skin.

I applied some, and it seems to have made poor Brainball even more agitated. Too late I realized he hates the goopy consistency of the bag balm. He's hissy, upset, frustrated, and stressed out, and I'm at a loss as to what I can do to help him. I don't want to make things even worse.

I'd appreciate any suggestions or ideas as to what I can do to help my big Alpha Boy.
MAOed by MaoMao at 12:01 AM

Poor Brainball!!!
I am so sorry to hear this issue.
I don't have very good advice, but I will pray for Brainball hope he is doing well.
I think you may talk to the vet first, is that a skin problem or?
Hmmm not enought information to understand what that is.

Poor Brainball, don't worry!! I believe someone in Cat Blogsophere will give great suggestion, deepest sincerely purr from here!

It isn't so much a skin condition as it is a result of Brainball having a mat on his back -- our cutting out the mat, leaving the patch of bare skin, is irritating him, and I suspect it's because the skin had been irritated by the mat. And it seems that whatever I do to help the area be less irritated only makes things worse for poor Brainball.

Thank you so much for your purrs! I know it will get better when his fur starts growing back, but I'd love to do something to help him feel better now, if I can.

Thanks, Max, for the excellent suggestion. If Mom tries anything else on me, I'm going to emulate my brother MaoMao and sharpen my claws on her butt -- only a lot harder!!

I am an Alpha Cat. I should not have to endure such indignity. *GRUMBLE*!!

I think Max has the right idea. Lots of good food, like baby food chicken or whatever he likes to eat.

Seriously, I'm not sure - it sounds like he just needs to calm down for a a while. I sure hope the irritation settles down quickly.

I think everyone is right, just give him time, and lots of temptations. Lots of stinky goodness. Lots of chickens even. Chickens are good.

Our Tigger gets them in exactly the same place. Every summer. Mom got a zoom groom this summer and got the last of the matts out with that.
But she went BEZERK on Trixie and de-floofed her. She laughed as she did it. She said it was less cat floof to float into her endless cups of tea.

Bach Rescue Remedy cream or Calendula cream will sooth and restore the spots. My staff uses one of them when one of us has an irritating skin.

Aloe vera gel works well too - It isn't as goopy and works well - Mom usually just puts a small dab - smaller than pea sized and rubs it in - If you get the all natural kind, he can even lick it off and it won't be bad for him. Otherwise, give him Temptations and tell him what a good boy he is, and how sorry you are, but in the long run, he will be happier for it.

Oh poor Brainball. Bagbalm can have a tingly feeling as it penetrates and I suppose it could feel irritating to a cat rather than soothing.

Georgia gets such huge mats everywhere and cutting them out is a huge process with her. I know they aren't comfortable but it really seems to bother her when we cut them out, so I suspect it does irritate their skin quite a bit.

I didn't like it when my mum cut off my matted patch either, but I don't think I was as stressed as brainbll is.

Maybe if you rubbed some butter or icecream on it, it would keep the site cool and be tasty to rub off? Or maybe like the others suggest - chicken?

Good luck mom, I am sure Brainball will be fine.

Am afraid we have NO advice, having recently (and still) been thru a complete shave! (Zoey, that is...) And the shave brought a personality change in BOTH cats! Ouch. Just tell Brainball we'll make him part of our lawsuit...

Poor Brainball. The clippers can irritate even if the skin doesn't look red. You could try bathing the bald patch with a cotton wool pad soaked in cool water, then rubbing a small amount of Calendula cream in well. hope he is soon back to normal.

Rudy says to just give him treats and let him be. The skin probably is a little tender if it's been pulled by the mat. He will enjoy the treats and the skin should be less irritated very soon!

MomBean agrees with the 'leave it be', but she says if it starts to get red you can try lanisoh on it-it's used for nursing beans, so if he licks at it you wouldn't have ta worry. You can find it at any drugstore or store like Target, etc.

I say some shrimpies would help.

Oh! If you use the lanisoh, make sure to warm it up between your fingers a lot, 'cause it can be sticky to put on at first.

Ah, poor Brainball! I sure wish I had some good ideas. Maybe he would enjoy wearing some Mancat fashions to cover his bald spot. Like a sporty polo shirt or something.

I do hope he feels happier soon.

Brainball, I have fluffier furs for a meezer, and sometimes get the matty things on my belly but not as bad. Momma has to work them out with a comb which makes me growly and hissy, but she makes it better with some treats. Treats are good medicines! Hang in there buddy!
Purrs and headbutts,
Sabrina

My advice is to sit down with Brainball and let him attack you. Seriously, just smile as he vents his frustration.

Yoo just gotta leave him alone, sereeusly, and treats always help. Punkin used to go about every 3 months to da groomers to be de matted. Da first time she hated it, da second time she din't get too mad but thawt mom needed a whapping when she came to pick her up, by the third time she was in love wif her "spa day". It really helped dat da groomer was pashent and loved kitties. Punkin was a big kitty and couldn't reach da same spot dat Brainball is haffing prollems wif. And wif all da extra fur around her spot #13 she had prollems wif dingleberries too. Mary (da groomer) would trim da area around spot #13 and, walah, no more dingleberries. Mats hurt, dey pull da skin until a kitty thinks it's gonna come right off!

OH NO! Poor Brainball. Da skin prolly is sore from being all pulled from the matt. Hopefull he will feel better very soon. We finks he's just tellin yoo to leave him alone for a bit.

I think treats are a good way to apologize as is tuna!

Mommy had a floofy kitty before me who always got matted; however, he did not mind the bald spots. So she is sorry she can offer no advice besides to let him be.

Poor Brainball I had a mat once and mom cut it off.It itched like crazy.The vet said Vaseline would be okay to sooth the itch...Love Ya Ariel

Other than to spoil him rotten, leave him alone.

That is too bad about Brainball....but I am sure he is not in as bad shape as our PooPoo. He will get over the bald patch....maybe he is just feeling a bit chilly there?
--JB

Oh man, poor Brainball buddy. Yeah, lots of treats and sympathy is definitely in order. And he looked so happy curled up in the box the other day...
YOur buddy, Jimmy Joe

Hello! I'm fine! Everything went well. Beanies have been taking good care of me! thanks for checking in!

My beans and i appreciate your kind words!

You should call your vet and ask if there is anything you can apply to soothe the skin!

I have no idea what you can do for him. I just hope he's feeling better soon. Poor Brainball.

Aw, we're sorry to hear about Brainball's hair mat. We have a very floofy cat, Amber, and afraid we can't help...but we were going to ask your advice. Isn't there any clippers that can cut a cat's furs without shaving to the skin? The groomer at Pet Smart says we'd have to have Amber shaved, just can't bring myself to do that to her. Amber gets her nasty mats on her neck and on her mane.

We would have to agree with the Bach's Rescue Remedy. Even if the problem isn't that his skin is irritated, Bach's is used to calm down kitties in any kind of stress. Just rub some behind his ears, and put a few drops in his drinking water.

PS from Rocky: Brainball, I feel for you, guy. A bald butt is enough to make any mancat hissy!

Oh my. just reading this made me hiss a bit. Now did you shave him? or just cut away?
It appears drafty and he looks like he is used to being covered so I think BB is just feeling awkward. I think some new toys, a tent, and maybe lots of treats would be a great idea. Uh what else, maybe a new scratching post too... and one of those splashy water dispensers.
You might give the vet a call... maybe he got razor burn, .... maybe a few days of happy pills.
I say no ointments or creams. I hate that stuff. I had a pimple once and mom put ointment on it. that made me so mad!

sorry Brainball for this terrible thing.

Gee,Brainball, I feel bad for
you :( I have no miracle cure to offer. Hope you get spoiled instead!
Purrs Mickey