The one of me is called "The Chairman": 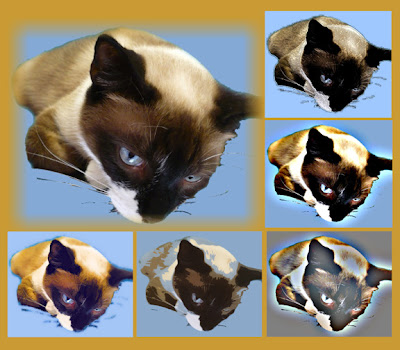 And the one of Brainball is called "The Lion King" (how, how, how, I ask, could my silly beans or that silly furst vet have efur pegged Brainball fur a gurlcat?! lookit his MANE, fur Cat's sake!):


Momma thought these photo-portraits of Brainball and me were so bee-yootiful that her eyes got happy-leaky.

Here's an update on how my wunnerful bruther Brainball is doing: in a wurd, bettur! He's still takin' recuperative naps in Mom and Dad's closet, but he's doin' more of his Alpha Cat Patrollin', and he's eatin' good and drinkin' good. Yay! He's also usin' the baffroom good, except his #2s are kinda loosy-goosy, so Momma's keepin' a close eye onna litterboxies. Brainball's takin' his medikashuns like a trooper and is eatin' yogurt from a spoon!

Dorydoo wants to remind efurryone that her burfday is comin' up on Octobur 16 -- there'll be a pawtay onna bloggie. She'll be turnin' three years old! She's also givin' the eye to a certain handsum mancat onna Bloggiesphere, hehehe. 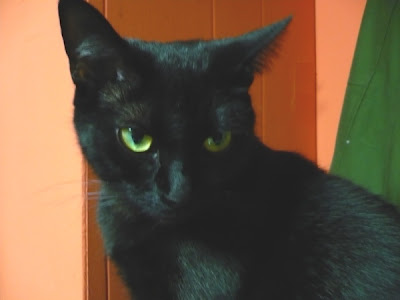 I send lovies to my sweetiepie Ariel, and Brainball sends lovies to his Patches Lady. And lookie here, we're sendin' roses to our ladies, too. 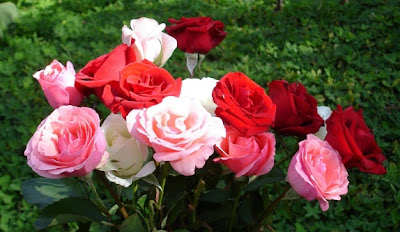 Update: Brainball had a bafroomie trip that was too close to diarrhea for momma's comfort, so she's givun him a kitty dose of Immodium. Askin' fur more purrs.

Update, three hours later: The Ballicus Mom here! Good news: the Immodium helped Brainball -- he hasn't had another episode of diarrhea, and we are hoping he won't. He's been on his evening Alpha Cat patrols, he's pawed at his Daddy repeatedly for rubs (he loves his Daddy's kitty massages!), and then after getting lots of rubs, he sprawled out all comfy-cozy and purred his deep, rumbly lion purr the likes of which I hadn't heard since before he got sick. *big happy cat mom grin!*
MAOed by MaoMao at 12:01 AM

I love that one of Brainball--she is there with the lion. It's wonderful.

Chairman Mao, I must thank you and the other Ballicai for your support in my campaign. I hope I live up to your trust!

Look at how manly Brainball looks with his lion picture! I really love all of those pictures.

Those are cool photos. I am very happy to hear the Brainball the Alpha MALE is doing better.

I'm looking forward to Dorydoo's birthday. You didn't give away Dorydoo's intended, Mao. Who?

I think the pictures of you and Brainball are splended. He is definitely a lion.

Hugs to all the Ballicai...G

But I'm not telling.

He has, also, translated into Portuguese the Wealth of Nations by Adam Smith.

He has been awarded several prizes.

Don't forget the name of this great author, you'll be hearing of him soon.


Please, add this literary blog to your favourites,

Those are wonderful photos that Maggy and Zoey did. They are soo talented. We hopes the imodium works and gets Brainball's poo back to normal. We wants Brainball to get better especially now that he's discovered his manhood.

Purrs for Brainball are on the way!!!
The pictures are wonderful!!!
And who is it that Dorydoo set her eyes upon????

I hope Bwainball gets better weal soon.
Those pictors are just cool!

Oh, Brainball, fanks for the gorgeous flowers! Purrs to you. I will see you at the purrday party. I am wondering who Dorydoo is interested in...any hints?

Oh, and I am purring real hard you feel bedder. Momma says not to eat any pumpkin ifn you have the poopies, that will make it wurser.

I'm purrin Brainball continues to do better, even if he is on the Imodium. And how sweet about Patches!

Those are great pics!

Those are wonderful photos of you, Brainball and Mao. :) I am continuing to send healing purrs out to Brainball.

Yoo know, I'd like to know hoo made up the rool that yer poops shoodn't be loosy goosy. Mine always are, and I'm FINE! I'm so happy Brainball is doing better!

These are very beautiful pictures, it can show all of your beauty and feature~!

And very sweet of you sending roses, I believe Ariel will be very happy.

It's me again, I am sending my purrs to Brainball, hoping he will recover soon 100%~!

Zoolatry did a wonderful job with your pictures. I love all the different colored pictures of you, Mao Mao and Brainball does look very much like the lion. I am glad that the Immodium helped Brainball feel better and that he is back to his big, rumbly purr. I'm betting that he will be back to normal very soon now.

Hooray for Brainball feeling better! That's great news. You are such a good-looking kitty family!

...oh, and MomBean says if I chase one more straw while it's in her drink I'm in Big Trouble. I think I may have to move to coffee stirry thingies...

We is so happy Brainball is doin' bedder. Does are wunnerful photos by Zoolatry. Do tell us who Doreydoo has a crush on...inquiring minds want to know!

I am so glad Mr. Brainball is doing better. Those graphics are wonderful!

Dorydoo, I wish I could figure out the mancat you are interested in, this is very exciting! And guess what? My Mommie will be back from vacation so I can go to your party. This makes me happy.

Those photo-portraits are very beautiful.I love Brainball's fluffy
orange fur and your beautiful blue eyes.Me and mommy are praying for him everyday and sending healing(Hugs).I
will definitely be here for Dorydoo's
birthday.I don't know who she givin
the eye to.Yet whoever he is he's very lucky she's a very beautiful kitty.Also the roses are beautiful I use that word alot.Mom's feeling
alittle better today.She was really
touched by all the kind words and love from our friends.Have a great day my sweetie and remember I love you lots...Hugs and Many Kissies Your Ariel

Those are awesome pictures!

Thanks for the update, Mao. I'm glad to hear that Brainball's feeling better, even though he's got some 'tocks troubles. Mom wonders if maybe his antibiotics are doing something to his 'tocks? And she also says "Poor baby" to him and send him scritches and hugs to your mom.

PS - EG wants to ask you-know-who to go strollering with him at the PAR-TAY today. He's worried that she might think he's too young for her, though. Because he's only 2. But he wants me to add that he's all mancat. Oh, this is sooo embarrassing...

Um, Mao and Brainball? Is it ok if I ask you-know-who to go strollering with me at the PAR-TAY today? I'm so nervous...

Those are awesome pictures, especially Brainballs! I am glad that Brainball is getting back to normal! He must be so relieved that everyone finally knows he is a mancat : )

Oh My! I've never seen a lion before!

Purrs to all the wonderful pictures.

Those are beautiful renderings of you two. I hope Brainball is all better soon.

Dese are furry good pix of you and your sissie Dorrie. Now, SHE iz a gurl, right? I tink I yam likin' her good black kitty lookz...& since I yam so heart-broken at da gender-bending Brainball, I has to turn my honorable atten-shunz elsewhere!

But, I yam furry glad da Brainball iz feelin' better. I tink we can still be furry good frendz!

Brainball is really a cat king!! He looks very manly!
Hope that his conditions keep staying well.
Great photos of you both!

Mao, may I please hi-jack your blog to speak with Dorydoo?

Dorydoo, you can call me whatever you want. You look very pretty sitting in my stroller. Thank you for coming to our GD PAR-TAY.

Titus here: EG's hyperventilating. He's never held paws with a girl before, so I'm gonna go get him a little water and see if I can calm him down a little. Poor little dude.

WOW!!! What a lot of Ballicai news over the past few days! Of course Brainball is a dude. He's, like, big and orange and well, dude-ish. Glad to hear he's on the mend. Good posting!
Your buddy, Jimmy Joe

Dear Brainball...I wish you were still my big sister instead of a mancat...I need a shoulder to meow on. I hope I did not make a mess of things with Dorydoo and Earl Grey today. I really want them to be happy and am delighted they are together! Sigh but you have your paws full with Miss Patches now isn't it? My that really happened before I even knew about it. I love you like a sister and wish you endless happy days...
Love Peach