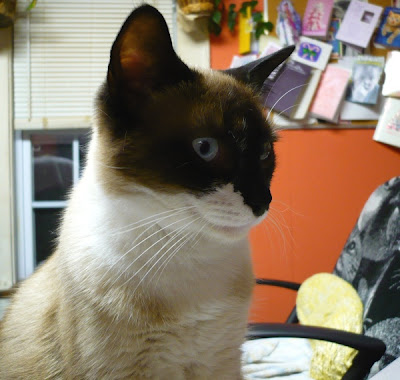 Auntie Dorothy, a superduper friend of Momma's who blogs at Scrungy's Creator, gave me and Marilyn a really nice award today, and our great furriend Gretchen told us about it: the Blogging Star Awardie.

The awardie was created by a bean named Barb at Skittles' Place. Here's what Barb says about the awardie:

This award is for bloggers who shine their light throughout the Blogosphere. Some do it with humor, others with creativity, and others with their kind and thoughtful natures. We all know more than a few of them so why not give them some recognition?

Here's what to do if you receive this:

Wowie kazowie, I'm furry happy and furry touched! Thankies so much, Gretchen and Auntie Dorothy -- I'm so tickled I'm gonna spazz all ofur the housie, and if Momma's not careful, I'm gonna sharpen my claws on her butt like I tried to earlier today when I was wantin' her to give me more stinky goodness! hehehe, ain't beans fun??

(don't worry, Momma don't have an owie. I was just tryin' to get her attenshun -- I kept MAOin' at her and she MAOed back at me -- me and Momma have MAOversashuns, MAO MAO MAO MAO ecksept Momma can't MAO as good as I can -- but I didn't wanna have a MAOversashun, I wanted more stinky goodness, DAG-NABBIT!)

Anyways! Before I get all spazzy, I'm gonna pass the Blogging Star Awardie to:

My bee-yootiful sweetiepie Ariel -- she's a shinin' star not only inna Cat Bloggiesphere, bein' such a sweet furriend to effurycat, but she's the shinin' star in my heart

My buddy Caesar and his sistur Prinnie -- Caesar's my twin sepurated at burth and by time, and he and Prinnie's bloggie always makes me happy

My buddy Jeter -- he's lotsa fun and so sweet and nice to effurycat, and I love his motto "life is GRATE"

And me and Marilyn are both givin' the awardie to our cousin Gretchen -- she gave us the awardie from our Auntie Dorothy, but she doesn't have the awardie herself, and she deserves it because she's a wunnerful Blogging Star, too!
MAOed by MaoMao at 12:01 AM

Labels: Blogging Star Awardie, I sharpened my clawsies on momma's butt, love and kissies to my sweetie Ariel, spazzin'

You certainly are a Blogging Star, I am so happy for you~!!!!!

Thank you Mao...you're a good cousin and a good friend. It's a fun award and I think it's gonna fly through all of catdom faster than it would otherwise...

Congratulations on your award! :) You picked some wonderful cats to receive it!

YOU really are a star! You are zippy and peppy, and just an all around happy guy! congratulation on this prestigous awardie

Wowie we are suprrrrrriizzzed MaoMao that you nominated us.

Congratulations my sweetie on your award.You sure are star in my eyes and I love you so much.Thank you for giving me the award your very sweet...Love and Many Kisses Ariel

MomBean thinks I was trying to call you last night, everytime she walked by I'd start going: 'mao Mao MOW MOW MOW!' (I didn't tell her why, though!)

deer mao mao,
congratulashunz to u an thank u frum me fer da "blogging star award"
dis iz verree eksitin fer me an i am honored.
luv--yer grate frend--jh

Congrats on being a Star, Mao! You look genuinely surprised, which is very modest of you.
Your buddy, Jimmy Joe

Hooray for you! You are a blogging star. And you made some very good selections, too.

Wow, congratulations, Mao! In that picture you look surprised - you shouldn't be!

ConCATulations Mao! You're definitely a star!
Purrrrrrrs,
your bud Pepi

you are a blogging star mao mao!!! happy spazzin xx

Congratulations on the award Mao, you certainly deserve it! Great picks too!
Tara

You are a super blogging star Mao!

Concatulations Chairman Mao! You are a great blogging star! A shining star thats what you are!! We will go and leave Ariel some purrrs, too.
Your FL furiends,

Many congratulations, Mao Mao. You truly are a shining star. You made some great choices, too.