Tagged, Red Bag, and Karen Jo Wrote Me a Limerick!

Guess what: Karen Jo wrote a limerick about me! I'm so exksited -- go check it out! It's a wonderful limerick and in it, Karen Jo talks about me killin' coffee stirrers, pullin' out drainstops, and jumpin' on counters. I love Karen Jo! She's a fun and talented bean, and I sure appreciate her honorin' me in this way.

And thanks to my bee-yootiful girlfurriendkitty, Ariel, and her sweet momma for makin' the request! hehehe, I'm a furry happy boykitty, I mean mancat.

And speakin' of Ariel, she tagged me to do the meme called First Five Dayz in my Fureffur Home. 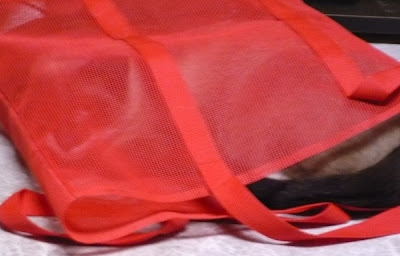 In this pikshure, I'm sleepin' inna vacuum cleaner bag. It's a nice place to sleep. Well, I should say, I WUZ sleepin'. Momma just had to wake me up with the rackin' frackin' flashy box, and I'm givin' her my best "fiddle fardle on you" look.

Day One: Momma and Daddy brought me home from the v.e.t., where I'd left my nuts. In other words I didn't have my hoo-has no more. DAGNABBIT! Well, I don't miss 'em now, but right after I'd lost 'em I thought what the BLEEP?! It ain't like I'd ever left body parts layin' around before. And nearly as bad, I'd had things called vacksines and eggzams where vetpeoples poked me with skinny, poky things and stuck stuff up my butt.

I was really hopin' things wuz gonna get bettur from that point on...

Anyhow Mom and Dad took me into what they kalled the Sanktuary Room which they'd fixed fur me to use before they innerduced me to my sisturs. Sisturs???? I wuz gonna be livin' with GIRLZ? (You gotta unnderstand, I wasn't as much of a mancat as I am now -- I wuz more of a boykitty then, and I thought girlz had cooties. Ariel has taught me that not all girlz have cooties, hehehe). I hung around in that ol' Sanktuary Room Jail fur about two minutes before I started hollerin', MAO! MAO! MAO! MAO! MAO! MAOMAOMAOMAO, LEMME THE BLEEP OUTTA HERE!!!! (I'm a Meezer, I'm loud, and I'm furry social, you gotta understand, and I didn't much care that there wuz girlz in the house -- I didn't wanna be all by myself in that room, no way, no how!!!!). So Momma opened up the door of the Sanktuary Room Jail, and I came shootin' outta there before she could catch me. hehehe, I rock.

Crap, this Day One story's gettin' long, but it was a big day and a lot happened.

Anyhows, I wuz feelin' real energetic considerin' I wuz a littlefella who'd just lost his nuts, and I came careenin' into the livin' room and DAGNABBIT, there were them GIRLZ lookin' at me and askin' Momma and Daddy, sayin' just what the BLEEP is THAT?

Uh, hi, I sez to them. I ain't a THAT. I'm MaoMao. Momma and Daddy were standin' at the ready, but with my super-outgoing purrsonality, they decided to see what would happen since none of the girlz was showin' signs of bein' aggressive. I'm so outgoing and friendly I think I bowled all them GIRLZ over -- stunned 'em, really!

Well, Brainball, my great big fuzzy Alpha sistur, liked me from the start, and we nose-kissed that first day, and she evun let me kiss her fuzzy butt. That wuz FUN! Dorydoo and Marilyn were hissy but they weren't mean, and thingz were goin' so well that Momma and Daddy let me stay out of the Sanktuary Room Jail Place fur the rest of the day (under close snoopervision, of course). They wanted to put me back in Jail that night, though, and they did for about a minute before I started hollerin' up a blue streak again: MAO! MAO! MAO! MAO! MAO! MAOMAOMAOMAOMAO!!!!! So that night I slept with Momma and Daddy -- part of the night, I burrowed in the kuvers between them, and the rest of the night, I kurled around my momma's head just purrin' and a-purrin' and a-purrin'. It was the bestest first night home I could have imagined. I even fergot about my missin' nuts.

Day Two: Brainball joined me and Momma sleepin' early that mornin' -- I wuz curled around one side of Momma's head, and Brainball came and curled up on the other side of Momma's head, and Momma woke up with the sound of two kitties purrin' in stereo! Made her real happy. Othur than that, Day Two wuz pretty much like Day One, with me and Brainball makin' friends by more butt sniffin' and nose kissin', Dorydoo hissin' at me, and Marilyn hissin', too, but pretty much keepin' her distance. Momma and Daddy gave up on puttin' me in Jail. Hey, I didn't do nothin'! I figured the nut thief oughta be in Jail, not me!

Day Three: That wuz when me and Marilyn started makin' friends! She really likes me, and really, she likes me better than she likes Dorydoo or Brainball. We nose kissed a really long time, and she told me "I like you, little guy. You're going to be a lot of fun." And then I knew I'd won over TWO of my sisturs, the oldest ones... two down, one to go. Dorydoo would be a tough nut to crack, I knew, 'cause she'z real, real intense, and me and her are close in age, too, so I guess she saw me as kind of a kompetitor or somethin'.

Day Four: Dorydoo started chasin' me around the house and watchin' me when I poo. She didn't attack me, but she squeeeked and squeeeked and squeeeeked, and anytime I got near her, she'd hiss. Efurrytime she did this, I layed down on the floor and putted my head on my paws and looked at her with my big blue eyes to try and make her like me. It didn't work. All she'd do when I tried to turn on the charmies is hiss at me. HISSY HISSY!!! I'd try to sniff her butt, and boyohboy that really made her hiss, and scream at me, too. So I'd go sniff Brainball's butt and feel bettur.

Day Five: I was gettin' along fine with Brainball and Marilyn. Brainball and me were even takin' naps together and rasslin'. But Dorydoo still didn't like me. She didn't hate me, but she didn't like me. Momma and Daddy told me it's gonna take some time and I just gotta be patient. They also told me Dorydoo might not like me because even though I didn't have my nuts no more, I still smelt like a BOY. I figure we both thought each other had cooties or somethin'.

Fast forward to now: me and Dorydoo have finally become kinda sorta friends -- she still chases me and squeaks, but she don't scream at me much and she doesn't get really, really mad, not deep-down mad. The only time she hisses at me is when I'm gettin' on her nerves, like any little bruther should do to a sistur sometimes. I know deep down she likes me, hehehe.

And as a gestchure of good will, I'll tag Dorydoo and let her do this meme next 'cause she's got some really cute kitten pictures to share and besides I gotta live with her and all, hehehe! She's the only one of us Ballicai who came to Momma and Daddy as a little bitty kitten. I was an older kitten when I came, and Brainball and Marilyn were already grown-ups. And anykitty who wants to play along, pleaze do!

(And lovies and purrs to my Ariel! I hoped you enjoyed readin' about my first five days.)
MAOed by MaoMao at 1:35 AM

I am really glad that you like your limerick. I loved reading about your first five days. You made friends with Brainball and Marilyn really fast. I like it that you didn't want to stay in that Sanctuary Room by yourself at all. You are a very social kitty.

Thanks for sharing your first five days, Mao. You and Brainball make friends very quickly, and then you were friends with Marilyn quickly too! My humans have been told it can take weeks or months for some cats to become friends.

Wow, you had a very exciting first five days Mao. I am happy that Brainball was so welcoming. Dorydoo reminds me of Pixie, except I think Dorydoo is nicer to you than Pixie is to me.

I can't wait to read about Dorydoo's first five days!

I loved reading about your first five days.I'm so glad you and your sisters are close and friends.I'm an only kitty it can be lonely sometimes.It sounds like you have a great forever home with a wonderful mommy and daddy who love you alot so your truly blessed ...Love and kisses Your Ariel

P.S Isn't Karen Jo a wonderful Limerick writer.I love the Limerick she made for you it's perfect.

awwwwwwwwww what a great story - and your limerick was great too!

What a great story! We liked your limerick, too. :)

MaoMao, you are one brave dude living in a house with all 'dem girls! We LOVED reading about your first five days. What a sociable guy you are!
Purrs,
Mr. Chen & Ollie

Mao, the nut goblin/theif must have one huge collection of nuts and hoo ha's. He is really greedy.

Those were great days! I'm glad all your sisters like you now. I can't believe how early your mommy and my mommy had our nuts off! hey, I don't know what I would have done with them, but who are they to take them away??
I'm cool with it now. I hope you are too.