A couple of youkitties, Jeter and Monica, wanted to know whatta "hoosegow" is. Well, if you're goin' to the hoosegow, it means you're goin' to jail. But I wouldn't mind bein' in jail as long as purr-etty Ariel wuz there with me.

Well, I wouldn't want her to go to jail, you know. Just sayin', hehehe. Oh fiddlefardle futz, you know whut I mean.... 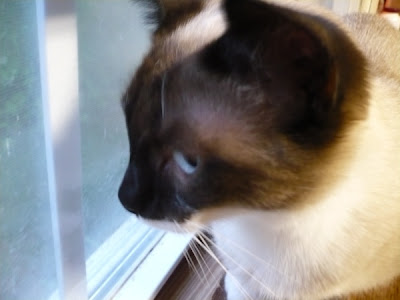 The reason I know about hoosegows is 'cause onna my favrite bands, the Red Hot Chili Peppers, sings about 'em:

...and on and on like that. I dunno what they're talkin' about half the time, but that's okay cuz they're rockin' cool.

So now I'm gonna try and rhyme as good as the Chili Peppers:

I wouldn't wanna go to the hoosegow
'cause I'd be a bored li'l Chairman Mao
But if with me was purr-etty Ariel
I think we'd do purr-etty well.

(my momma sez she's gonna put me in the hoosegow if I don't quit snatchin' foodies off the counters when she's cookin' and I think she ain't lookin', heh, I made another rhymie!)

and as always, my thanks to Jeter, my superduper poetry teecher. hehehe!
MAOed by MaoMao at 9:13 PM

Around Your Wrist said...

words are FUN! we love to play with them here. make them, bat them around, twist them, play tag, and hide and seek.

it is pretty cool about oscar adopting me! i had no idea how much i would enjoy having a dad!

Ooh, I don't think I'd want to go to that hoosegow place!

Mao, I see you like sleeping in the soft fresh clothes too:)
I think my Meezer pillow reminds me furrrry much of you....what do you think?
thanks 4 coming by today>(^,^)<

Thanks for the lesson on hoosegows! I like your poem, Mao. :) You are becoming quite the poet!

I wouldn't mind being in the hoosegow
with you.We could snuggle together on the cot and listen to the Red Hot Chili Peppers.Yet I go anywhere with you (blush).I love the card you put on your blog.I so lucky to have a sweet,romantic,handsome boyfriend.
I'm a lucky girlcat :)

Do they have catnips in the hoosegow?

This made my Mom giggle. She loves the Chili Peppers. Hee hee
You are a very good rhymer.

you is good at rhymin!!!

I am pretty sure it would be boring in the hoosegow.

I would never want to go to the hoosegow... even for a visit, no thanks!

wow that is an interesting word - and imagine! You learned from the Chilli's themselves!!!

My humans went to see a chilli pepper tribute band once, they were called the red hot chilly beans!! They were pretty good!

Mao yoo are furry good at rhymin. No way would we want to go to the hoosegow, cuz thee probly won't be enny mice or fev-vers to catch theer.

That was a very educational post. First of all I learned about hoosegows, and then I learned that chili peppers could sing. Thank you Chairman.