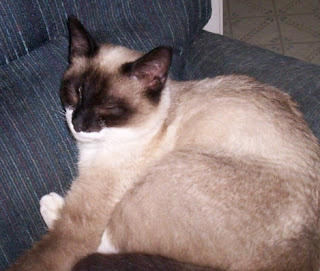 Momma didn't say "Stinky Goodness, Turkey Flavor" to get me to open my eyes for this picture 'cause she thought I looked cute, sleepin' so snug in the recliner.

My furr-iend Mr. Hendrix the Kitty tagged me for a meme. Goody, memes are fun, and I like to play tag. It's right up there with playin' chase and rasslin' with my big sister Brainball and battin' at her fuzzy britches! In this meme, I'll tell everybodies five reasons why I blog.

1. On her writing bloggie, Momma participates in the Thursday Thirteen meme. She likes it because she finds neat-o new bloggies that way. Well, one of the neat-oest bloggies Momma found on Thursday Thirteen was Kimo and Sabi's bloggie. She started leavin' comments on their bloggie, and when she introduced me on her writing bloggie, Kimo and Sabi came over to meet me, then they introduced me on their bloggie to the kitty bloggiesphere! Isn't that nice of 'em? They're such great fellers. I was like, wowie -- my new friends have so much fun with this kittiebloggie thing that I've gotta try it out, too.

2. Momma already had this Ballicus Bloggie up and runnin' as her kitty bloggie, so she let me pretty much take it over as the Bloggin' Ballicus. My sisters, Marilyn, C.J., and Dorydoo, are showin' more interest, so they might start doin' some bloggin', too, one of these days.

3. I'm a ham. I don't mean I'm a pig, I'm a cat, most defurr-nitely. But I'm a cat ham. I'm really super-duper-pooper-scooper outgoing, and I love meeting new kitties, new people, new everybodies. I love to have fun. And on the bloggiesphere, there's a whole new world of kitties and people to meet!

4. It's often said in this household that "MaoMao's spazzing" or "MaoMao's bugging out" or "MaoMao's wired." I'm a superhyper, high-energy adolescent boykitty, and when I go on a tear, boy do I ever go on a tear! And this bloggiefying stuff gives a neat-o second level of meaning when Momma and Daddy say "Maoknocker's wired." Because I am wired, to the entire kitty bloggiesphere! hehehehe

5. I'm real adventurous and I love learnin' new things. Technology is still a new frontier for many kittycats out there. Some kitties think that 'cause they don't have opposable thumbs or somethin' that they can't do cool technological stuffies. Well, I'm here to tell you that you can! All of you bloggiekitties know that, of course. So bloggiekitties unite and teach other kitties all about 'puters, too! Maybe someday kitties will be the most technologically savvy, wired, blogiferous critters on the planet! There'll be BoingBoing for Ballicai, Yahoo will be named Meow-who, and CNN will stand for the Cat News Network! Hey, it could happen, don'tchy'all think? Just thinkin' about it makes me purr.

All righties, I've gotta tag five kitties/kittyfamilies to participate in this meme and tell everybodies why they blog. I'm taggin':

Jake and Bathsheba (whichever one of you feels like meme-ing)

Zippy, Sadie & Speedy (whichever one of you feels like meme-ing)
MAOed by MaoMao at 10:26 PM

Hahaha! You are da second kitty who tagged us! We will post our "Friday Five" tomorrow! We is glad we met you and you are havin' fun in da cat blogosphere!

We liked reading how you got started and that you found Kimo and Sabi through the Thursday 13. We think we once did a Thursday 13 on why we blog so we'll have to narrow this down to get to just five reasons. Like Kimo&Sabi, we'll try to post this for Friday, but it's getting late and our secretary is tired for now. Thanks for thinking of us!

You have very good reasons for blogging. #5 sounds like a great idea to me. There is already a Cat Blog Help Center set up, so the kitties are on their way.

Those are all fantastic reasons to blog! Yeah to meeting new friends and all the neat stuff about them!

I am glad you started blogging - I love your photos and stories!

Wow, you made a very good list! And I can tell you are a ham, you are very silly! I'm glad you started blogging.

Well we are so glad your blog. We love seeing your pretty face. We are laughing - wired up! hahaha.

I like the fact that you are super duper pooper scooper outgoing. That is a good way to be in life. You have more fun, I believe!

Thanks, everybodies, for being so nice! It's great to have you all as my furr-iends.

Wonderful reasons to blog!!! You do sound hyper!!! Be careful when you say Ham around The Meezer Gang.

Gosh ... With all of the energy that you have, you MUST blog!
DMM

Hehehehe, DaisyMae! Momma calls me a "spazzy boy" all the time.

Those are very great reasons to blog. It was interesting to read how you got started.

Thanks, Monica! Sending you big purrs and kittyhugs.

Yea great list. Kimo & Sabi are great guys. I'm glad they introduced you! You're lotsa fun to read about and your sisters seem like they have a lot to say too. Take care!

Hi there, Mr. Hendrix! Thanks so much. You're a great kitty, and I'm so glad you're my furr-iend!

Purrs and kittyhugs from MaoMao!