Yesterday, my friend Daisy posted a purr-ecious picture of her older sister Pixie as a kitten, snuggled with Cricket, a beautiful Meezer who went to the Rainbow Bridge before Daisy arrived.

And I thought I'd post this picture of Brainball and Dorydoo, which was taken over two years ago, only a couple of weeks after Dorydoo arrived. They were already close friends when this picture was taken. You can click on it and make it bigger. 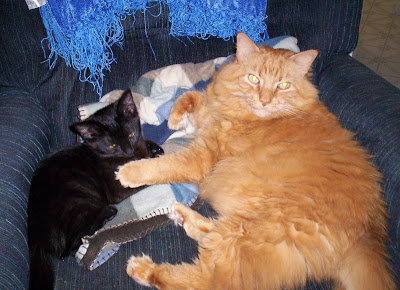 You can see Brainball's big, fuzzy paw touching little bitty Dorydoo, all sweet and protective-like. That's Brainball for you, the Gentle Giant. Back then, Brainball was going on seven years old, and Dorydoo would have been about three months old.

Now, Dorydoo's two-and-a-half years old and bigger (but still not real big) and Brainball's going on nine, and they're closer than ever. Aren't my older sisters nice? I'm proud of them.
MAOed by MaoMao at 12:30 AM

What a sweet picture. :) Dorydoo was so tiny! And Brainball so friendly and fluffy. :)

Is it that Dorydoo is so tiny, or that Brainball is gynormous??? That's surely a fluffy kitty!

oh goodness, that is a sweet photo. You have nice sisters. I'm glad that you are all getting along!

Your big sisters are nice, and you are very right to be proud of them. And look at the baby Dorydoo, so tiny! It is so sweet how Brainball is being protective like that. I love looking at kitten pictures.

Oh that is so sweet! Fluffy Tummy and a cute baby fuzzy kitten. Such a great picture. They are not even hissing at each other.

Isn't it nice when you all gets along? :)

Dorydoo's grown now -- she's two and a half years old, but she was only about three months old when that picture was taken. Wasn't she a cutie? She's still a cutie, but she hisses at me sometimes. Girls.

Thanks for comin' to talk, my kitty friends!

What a cute picture!! Did you know that orange female cats are very rare? Most orange cats are boys!

I asked momma how rare are girl orange kitties, and she said there's only about one orange kitty in sixty is a girliecat. Wowie wow!

Thanks for commentin', all my kittyfriends!

Dat's a furry kyoot pichur. We haf to say that Brainball is a lovely big furry fuzzball, but we are a bit prejj-yoo-dissed about ginger kitties.Our mum has had 2 lady ginger kitties, and they wuz bofe furrom the same family. (Grandmother and grand daughter)but they haf bofe gone to the Bridge now.

The question Momma and Daddy like to ask is this: is the Brainball a big fuzzball, or is the Fuzzball a big Brainball? They like to play around with Brainball's name!

Thanks for comin' by to talk, nice kitties!