Us Ballicai and our beans live in the country, and once in a while some interesting critters get into the house... like mousies!

So last night Momma was sittin' at her pooter workin' on a writing project, Marilyn was snoozin' on the JVC, and me and Brainball and Dorydoo were runnin' in a thundering Kitty Elephant Herd. Alla those things are real typickal around here.

Turned out I'd caught a mousie. That mousie must not have been furry smart, comin' into a house with four kitties! I took him into the baffroom to play with him (the baffroom's where I kill Evil Coffee Stirrers, too), and Brainball and Dorydoo were helpin' me out. We were all in the bafftub playin' with the mousie, we were real ecksited. There was so much ruckus that we woke up Marilyn, and she jumped down off the JVC to see what was goin' on.

But when Momma and Daddy got into the baffroom, Daddy tried to take the mousie from us!

Well, I wasn't havin' none of that. I got that mousie in my mouth and run offt with him to the kitchen. Then I started playin' with him again and batted him under the fridgerator thingie. I couldn't get him after that, but Daddy was able to reach the mousie's tail just barely, and he got hold of him and pulled him out. Then Daddy took the mousie outside (the mousie was still alive -- the beans got involved quickly). DAGNABBIT!!!! Why'd he hafta take my mousie?!

I don't know why Momma and Daddy wouldn't let me eat the mousie. But they nefur, efur, efur fuss at any of uskitties when we catch a critter. They praise us for bein' Mighty Hunters. It makes us feel so good.

So even though I didn't get to eat the mousie, I did get to catch one and play with him a little, and here I am lookin' mighty satisfied with myself. 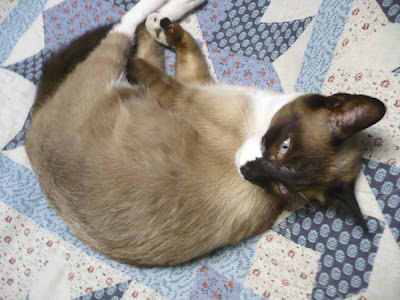 Ariel, next time we get togethur, we'll hafta hunt mousies!
MAOed by MaoMao at 12:01 AM

Hi, Monica! WAH about havin' the mousie taken away! And he was still alive -- Mommy and Daddy got into the act purr-etty quickly, FIDDLEFARDLE!

What gorgeous kitties! Would they like to play with mice designed for kitty play?

Our website is looking for cat lovers with blogs to enter our contest. Details are on our homepage at www.felinexpress.com

Well, michico often takes my toys away. Just relax we will have fun next time.
Have a lovely weekend.

My big bruther Mao told me stories of how they used to live in a howse that had lotsa mowsies owtside, and he and Rocky wood bring 'em into the howse at nite thru the cat door and then play with them. Once they put one on the bed. And the FL and Mr TF wood be up for a long time trying to ketch the mowse with thare hands becuz they don't like to lissen to the sqweeking ... Mao sez peepul are reely bad at mowse hunting.

I fink I was a real mousie when we escaped to da out of doors yesterday!
Kimo

He's makin' that up!
Sabi

Mao I learned about it at Marilyn's blog - You surely are a great hunter - you played it with it too long I think or you would have eaten it already before the beans got involved...

Holy Snikes Mao!!! I wonce caught a mousei with my bare hands, I mean paws too!!
Next time tell the mouse to be quiet and not wake Marilyn....you might have better luck keepin it:)
Love Miss Peachy

"Wow" you are a great hunter too.
I would love to hunt mousies with you.Sorry your dad took it away if we catch any you can keep them...Love and lots of kisses Your Ariel

You are a brave hunter Mao, we are proud.

Oh wowie MaoMao.
What an exciting time at your house. we never get a mouse here... just a jumpy spider.

Good job hunting!!! I think all meezers have that hunting gene because I am the House Hunter in our house.

Latte
(they seem to always let me finish munching on the insects...)

You are a very good hunter!
Yes, humans are crazy taking our preys away, arn't they?
Have fun brother!

Wow, you guys are very good hunters! Your humans were really fast in getting your prize away from you. What a gyp.
We usually catch our critters at night, so our humans don't find out about the business until the morning.

Mao, next time you guys should lock the baffroom door! He, he, he, wouldn't that be funny?

I have never even seen a real live mousey, just my fuzzy mouses.

It sounds like you guys had a party at your house last night. Thundering herd of elephants and mousie hunting? Wowie!

I'm so glad all ya'll got to play with a real live mousie. You're very alert.

Sometimes mice can have diseases so it might be good that you didn't eat it. how awesome you got to play with it and bat it around and stuff. oooo I'll bet that was much more fun than even a fev-ver butt mousie!

Good job! I had mousies in my house too a few weeks ago. Mum won't let me eat them either!

I WANT A MOUSE! That sounds like so much fun. You and Derby are great mouse catchers.

Good job on catching the mousie, Mao. Playing with it in the bathtub must have been lots of fun. It's too bad the beans took it away, but if it's stupid enough to come into a house with four cats in the first place, maybe it will come back.

Oh no that wuz mean taking yer mousie away when yoo wuz doing rodent control furr yer Beans.Mum nefurr takes my mousies away, but I yooshully give them To Eric ennyway when they won't play wiv me ennymore. One day one uv us whapped a dead mousie unner the frij an mum didn't know till there wuz an awful smell.

Mice are OK - I liked to catch and eat them when I was feral. Now I just want to play with them.