Here we are, catchin up on our sleep... we love to snooze! Can ya tell? hehe 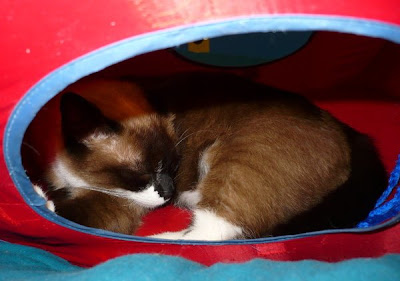 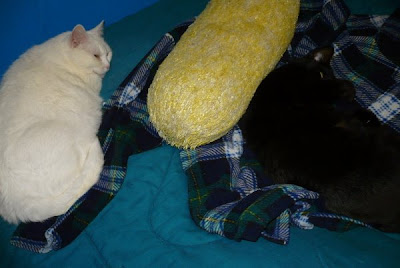 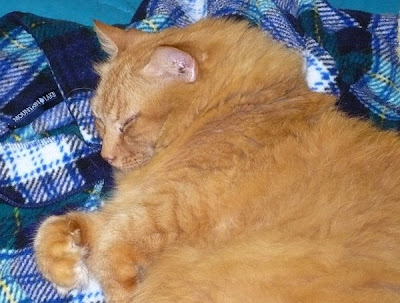 And we've got some awardies to catch up on, too! Omer, Daddy to Snow, Leo, and Fairy, and Jan's Funny Farm gaved us the I Love Your Cats Awardie. Thanks so much, Omer and Jan! We love alla yur kitties, yur woofies, and yur bloggies, too!

Jan's Funny Farm also awarded us the Brilliante Weblog Awardie. Thankies so much! All of you are furry brilliante!

And here's somethin we've been meanin to do fur a long time: explain how we gotted our names. We'll explain about "Ballicai", too.

So Brainball was an only kitty fur three years, from 2001 until 2004. But then, Dorydoo joined the household! She was named Dora the Explorer 'cause she's furry curious and intense and smart and loves to ecksplore, but her nickname quickly became Dorydoo. And beckause she's a little black kitty, she gotted another nickname, too -- "Blackball" (notice the "ball" theme frum Brainball). And one day, the beans figured it out: Brainball and Dorydoo are BALLICAI (plural) and each one of 'em is a BALLICUS (singular). The beans maded up the words "Ballicai" and "Ballicus", based on the "ball" theme.

So the Ballicus Dynasty was borned.

Next, Marilyn joined the Ballicus Dynasty. She showed up as a stray kitty on the back porchie in late 2006, and the beans took her in. She was named Marilyn MonREOW after Marilyn Monroe, the famous acktress, beckause they are both glamour gurls. And beckause kitty Marilyn has two differently kolured eyes, one of her nicknames beckame "Eyeball" (notice kontinuashun of the "Ball" theme), which made her the thurd Ballicus.

And I joined the housiehold in early 2007 -- showed up on the back porchie just like Marilyn did. When Momma asked me, "Who are you?", I answered "MAO!" So I'm MaoMao. (Sometimes I'm MaoMaoMaoMaoMao!) And I'm the fourth Ballicus beckause sumetimes I'm called Maoball.

So there you have it -- how alla us gotted our names and how alla us beckame Ballicai!
MAOed by MaoMao at 12:01 AM

Labels: awardies, catching up, how we became Ballicai, how we got our names, snoozin is grand, we Ballicai send love and purrs to our sweetiepies

That's a wonderful story ~ we've wondered too about the name 'Ballicus' and finally we have the answer - one time we even checked it in the dictionary to see if it was a word we didn't know about!
We're glad you all found such a wonderful home - we miss your blogging and hope you are back to full flow soon :)

Lots of purrs and hugs from all of us..

Oh, wow, what a wonderful new header...I really, like it. I like the look of your whole blog.

You all look so compy there, too.

Mike has his turn at blogging today, so go say hi to him.

You all always look so content! Great pictures ... I loved reading about how you got your names.

Hey, I do that too!!! I hope you don't get interrupted like I do when you curl up and snooze, though. I like the story about how you all became Ballicai.
Your buddy, Jimmy Joe

Those are great pictures. You're all so cute! I loved reading about how each of you got your names. It's so sweet that Marilyn and Mao chose the perfect forever home by showing up on the back porch.

I always wondered about the names! Thanks for sharing!

I see Marilyn has finally got off the computer, hee hee!

What an interesting story. We wondered where ballicus came from.

We must be a little slow. We still don't understand what a ballicus is. It isn't in the dictionary.

hehe, Jan! Momma and Daddy maded up the words "Ballicus" and "Ballicai" based on the "ball" theme! :)

Good to know the story behind the sensational Ballicai. Love the new look of your bloggie as well. Snooze on.....

Congratulations on your awards. I love all the pictures of you snoozing. I really enjoyed reading about how Ballicus and Ballicai came into being and how you all fit into the theme.

Love hearing about all the names. I can't picture Brainball as CJ though. (High paw soul brutha}

Do you guys have a homing device set up on the porch or what?

Thanks for telling us how you got your names! Mom says that animals seem to be drawn to people who love animals. They just know! We got our cousins Cosmo Kitty and Tucker Scizzorhands that way. They just showed up one day and never left. Mom also has an office kitty named Feather, who really lives across the street from her office, but Feather is always with Mom.

I was always wondering about your last name very interesting.I love the new look and header.Your all so adorable and I sending hugs to you all...Kissies and Snuggles your wife
Ariel

MaoMao, you all look so comfy snoozing! We enjoyed the story of your names, it is really cool to learn that about all of you! Concatulations on your awardies too!
Purrs and headbutts,
Sabrina, Sam and Simon
Pee Ess ... your new bloggie layout is really neat, Momma changed ours too!

What a fascinating story on your names!

The Ballicus dynasty is the greatest ever!

We knew some of that story, but not all. We didn't know about the whole Calamity Jane thing (even though we knew that everybody thought Brainball was a girl until not that long ago - sorry dude!) and we didn't know how Dorydoo gotted her name. This is very, very interesting. Thanks for clearing that up. We love hearing how everyone gets their names.

PS - Your new header/layout is AWESOME!!!

I like hearing how all of you got your names. How the ball theme was used with all of your names, and your blog!

Congratulations on your awards! They're very well deserved.

Great photos and a great post. It is always to much fun to learn about who a kitty gets their name. You have a bunch at your place and I bet you sure all have a lot of fun.
Congrats on all of your awards. So deserving.
Great job!

What is that thing beside Marilyn? It is driving us crazy trying to decide what it is!?

I like how you all got your names, it is very sweet.

Kellie, Dorydoo's layin on the fleece shirt to the right of Marilyn! hehe, she's hard to see cuz she's a little black kitty.

And the yellow thing is our fuzzy yellow jellybean! It's a pillow-like thing. :)

What a gorgeous story.
Your parents must be the best in the world for all of you to just turn up on the doorstep! You is making Momma smile big with how Ballaci came to be :)

We love all yoo ballicai! Mom thinks it's funny to call Speedy "butterball" but dat is more because he looks like a plump turkey when he is in meatloaf position.

Cool story on how you all got your names and the Ballicus, too! We love the new look of your blog! It is so ccol!
Purrrs from your FL furiends,

Those are nice pictures. I like the blue shirt!