Karl gave alla us kitties on the Cat Bloggiesphere a wunnerful challenge, to make a new furriend who isn't of our same species. Well, I asked Spartacus -- also known as Sparky the Puggle -- to be my NOMSS (Not Of My Species Speshul) Furr-iend, and he acksepted! I'm so happy! 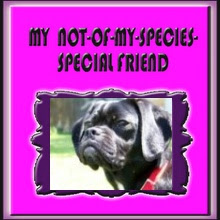 Isn't he handsum? Sparky's such a nice woofie, he's got a great sense of hoomor and a superduper perssonality. He loves human food like me, though he's eated marshmallows, and I've nefur gotted to try those (MOMMA!), and he efun goes to moovies! And he's both a puggle and a snuggle-puggle! That's just way kool in my book. If I was a woofie, I'd wanna be a snuggle-puggle, no doubt about it. 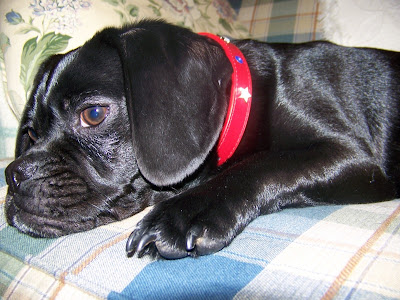 I'm real ecksited -- we're both young fellers (I'm not much ofur a year old, and he isn't quite a year old) and we still have that boyish outlook on life and can grow up togethur. I think we'll enjoy bein' furriends furry much! And my sisturs like Sparky a lot, too!
MAOed by MaoMao at 12:01 AM

Labels: hi to my sweetie Ariel, my NOMSS friend, Sparky the Puggle

This is soooo exciting! Thank you for accepting my Dare! And you found such a wonderful new friend - I couldn't believe it when you told that thing abut going to the movies but I went to his blog and sure enough, there is the story!
Sparky will make a wonderful nomss friend for you, I am very happy!!!
Thank you again, and I hope you will have lots of fun with your new friend!
Your friend Karl

What a wonderful choice.Sparky is cute and I'm sure he's a great friend.I've never tasted marshmallows
either I bet their yummy though...Love and Many Kisses Ariel

Sparky looks like a great dawg. And marshmallows rock! You definitely need to try them.

Marshmallows? hmmm....wonder how they taste. Hey, D? Where art tho?
I need a treat!

That's funny, I picked a pooch for my NOMSS to. Her name is Elise.
hugs...D

That is a very good friend you found there. He does look very cute. I wonder if he likes kitties? His he ever chased one of us before?

Woww, what a cute friend you have, Sparky looks like a good friend for you, and he looks is a very nice doggie~!

He sure looks like a nice fella. It was really nice reading your story!

Ooooo! Sparky is adorable! We have to do out NOMSS Friend soon, too! Hope you have a great week, MaoMao and to all the Ballicai.
Purrs,
Mr. Chen & Ollie

Oh he's SO cute! I'm glad you've made a new friend, I want to make one too but Meowmy keeps saying she's too busy to help one of us let alone the three of us. I'll have to work on her.

Hi brother!
I am back!
You have a nice furry friend. I think you are very courageous to have a dog as a friend. I am scared of dogs.
Love

Sparky is a cute woofie and I'm sure you will have a great time getting to know each other.

MaoMao, I'm so glad you asked me to be your NOMSS furr-iend! All the animals of the world should unite and look out for each other, so everycat and everypup gets their fair share of yummy treats!