Momma got us some kool pad things to lay on -- they're called Purr Pads. She put one on the window perch and another on the sewing machine table in front of the bedroom window.

Me and Brainball and Dorydoo tried out the purr pads, and we love 'em! Marilyn will try 'em out when she gets back -- she's off visitin' Mick at his purr pad, hehehe! 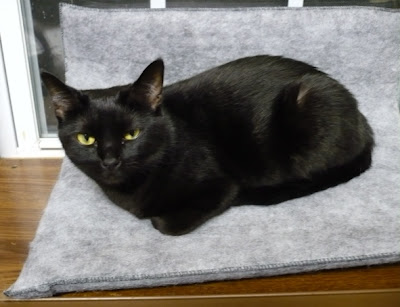 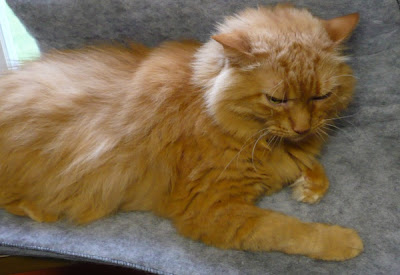 And here's a funny pikshure of me and Brainball sharin' a Purr Pad. Momma was gonna fix the one on the perch better for us, but I got impatient 'cuz I wanted to see out the window. There was a mighty interesting buggie out there. So I worked myself in between the window and the pad while Brainball was snoozin', and I got to look out the window and snuggle against the pad at the same time. 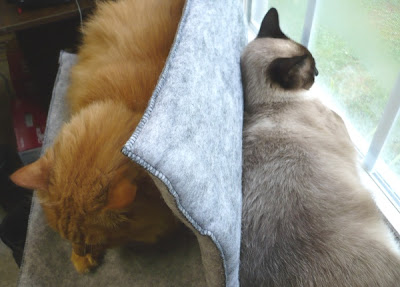 Those things look really soft! I like the picture of you two sharing a Purr Pad. Maybe I should look into getting one of those things. If only I could get the credit card...

I love purr pads too! Since I go outside, I get mine dirty so mom has to get me new ones. I don't sleep on mine much in the summer, though.

Congratulations on catching that mouse! Next time you have to eat it before your dad can take it from you.

They do look comfy. I laughed silly at your picture between the purr pad and the window. Wonder what Brainball was thinking.

I wore out two purr pads. I made tons of biscuits on them. Momma used to get them at Wally World, but she says they don't sell them anymore. :(

I have never seen a purr pad before, but that looks like a great thing!!
Have fun!
Your brother

Those look very soft and comfy.Mommy wanted to get me a new bed.She never heard of these before, now she says she's going to try to get me one.I would love to snuggle with you too...Love and Kisses Ariel

That last pic is cute, I'll have to ask MomBean to look for one of those for me.

oh they look heavenly! Yes indeed, heavenly. I want one!!! I want one now!

Purr pads are wonderful! Relax and enjoy them!

Those Purr Pads look great! It is very funny how you shared the Pad with Brainball.

Those Purr Pads look great. I really like the way to shared with Brainball.

Wow, that is such a terrific photo of you two sharing that purr pad! We also have purr pads and really like to lay on them.