Brainball reporting for duty. Looks like it's my turn to do the First Five Days in My Forever Home meme. 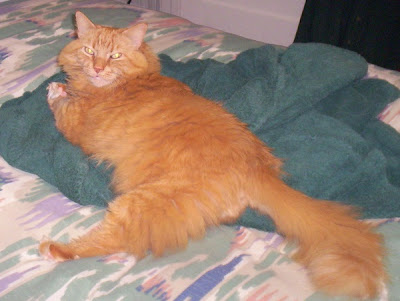 I'm not only Alpha Cat around here but I'm also the First Cat, and I was an Only Kitty for over three years, until late-2004 when Dorydoo (then a baby) came. If you've only been reading this blog for a short while, you might not know why we are called Ballicai. Well, here's the story: my real name is Calamity Jane, or C.J., but I was soon nicknamed Brainball because I'm a fuzzball with eyes. When Dorydoo came, she was nicknamed Blackball, and together, we became the Ballicai. When Marilyn came, she was Dualliball (her nickname is Duallipot), and when Mao came, Mom and Dad called him a Maoball, in keeping with the Ballicus theme. Singularly, each of us is a Ballicus, and collectively, we're Ballicai. I'm the Founder of the Ballicus Dynasty, and my title is Ballicus the First (or Ballicus I).

I'm the only Ballicus who has lived in another place with Mom and Dad. They moved where they currently live after I had been with them for two years. Before they lived in this house in the country, they lived in town, in a condo. And I started out as their neighbors' cat. Those neighbors had me and a loud, mouthy little dog. I don't have a high opinion of those former people of mine because they moved away, and though they took their dog, they abandoned me. Fortunately Mom and Dad were there for me -- they had always admired me and thought I was a beautiful and sweet cat, and when those people abandoned me, Mom and Dad took me in. The vet told them she thought I was around three years old at the time, going by the wear on my teeth.

Mom and Dad love all of us Ballicai, but I've been with them quite a while, six years now, and they've been married for ten. I was the first kitty they had as a couple. They say quite frankly that they simply cannot imagine life without me and that, indeed, it's as though I have been with them forever. I really love my Mom and Dad. And I love my brother and sisters, too. MaoMao shows promise to someday become my successor, Ballicus II, but he's still so young and undisciplined and needs my experience and guidance. Dorydoo needs encouragement and support for her Black Kitty Projects, and my tough, rugged nature is a good influence as well on Marilyn, who is so sensitive and feminine. I take very seriously my Alpha Cat responsibilities of love and protection to all of them. Is it any wonder that one of Mom's nicknames for me is Warrior Queen Boudica.

Okay, enough mushy stuff. On with the meme!

Day One: I was already comfortable with Mom and Dad, and it turned out the condo was familiar to me, too, at least the layout. I'd lived with those neighbors of theirs for a time, and the condos were all made similarly. When I first came, I didn't want to jump on the couch, on the bed, or on any of the chairs. Mom and Dad encouraged me and said it was okay, but still, I stayed on the floor or on the carpet that first day. I was really happy to have such a new, good home, and I wanted to do everything right.

Day Two: Hmm, those first five days were a long time ago, so specific memories are a bit fuzzy (ummm... pun intended *kitty wink*). But I remember Mom and Dad kept encouraging me to jump up on the bed or on the couch or the chairs. The prospect was looking more and more tempting. And if Mom and Dad said it was okay, it must be okay.

Day Three: I decided what the heck and I started jumping up on the chairs and the couch. What fun, and how cozy for naps. And I started sleeping with Mom and Dad in their bed. This was the life! And oh, Mom and Dad talked to me all the time. They still do. I wag my tail when they talk to me. I love being talked to. And I think this might have been the day when Mom and Dad first called me Brainball.

Day Four: I began knocking things off Mom's nightstand to wake her up in the morning. I also officially took up my duties as Alpha Cat and began patrolling my territory: doing a check of the family perimeter regularly in the mornings and in the evenings and yowling when I saw a cat through a window or through the sliding glass door. I've kept up my diligent, daily patrol, and I'm currently training MaoMao in effective patrol procedures. He's a quick study and will be a fine Alpha Cat someday, when he matures.

Day Five: I discovered the menace of Evil Coffee Stirrers and began my battle against them, the importance of which I passed on to the Ballicai who have followed me. Mom and I also began playing a delightful game of peek-a-boo where she'd peer around doorways and get me to chase her. I was a very active, feisty cat at three years old, and at nine, I still have quite a bit of energy. I have to, in order to keep up with my younger brother and sister!

Chairman Mao will be back tomorrow. Purrs to all you fine blogging cats. Brainball signing off *salutes*.
MAOed by MaoMao at 12:04 AM

I can't believe those first humans just abandoned you Brainball! How could anyone do that do a cat? I am glad your humans took you in. You clearly have a wonderful Forever Home and you make a great Alpha Cat.

I also can't believe that anyone would move away and just leave you behind. I am so glad that your forever Mom and Dad were there for you. You are a great Alpha Cat. Good job on discovering the evil of coffee stirrers in just five days.

Rotten humans that left you! How wonderful that your folks wanted you and that there is a happy ending!

I can't believe someone could abandoned such a sweet beautiful kitty like you.I'm very glad you found a great forever home with
a wonderful mom and dad who love you.
Your a great Alpha cat and sister too...Huggs and Purrs Ariel

We are so happy you are in this home with your real family.
You are a pretty cool alpha cat and very pretty too.

We hate mean beans!!! We're glad that your mom and dad rescued you and gave you such a great home. Good luck with those Evil Coffee Stirrers. Those sound scary.

You are such a sweet and pretty cat, we are glad your humans rescued you.

wow those beans were dumb. it worked out tho that your mommy and daddy are wonderful people who treat you the way an alpha cat deserves to be treated. of course you should get on the couch and sleep on the bed. humph, those other beans needed training and a, well, I'm a gentleman kitty so I'll stop now.

what a great kitty you are. I like to be talked to too.

oh Brainball, how horrible that you was abandoned, but you gotted a wonderful forefurr family!!

i love whapping stuff off the night stand too - Sammy

Brainball, I sure am glad you found such a good home. I wonder if those earlier BAD beans yelled at you for getting on the sofa and bed, so that is why you were a little hesitant at first. It must be great to be the Alpha cat!

Ok, I have to say i find it really amusing that it took you only three days to become ' untrained' enough to jump on the furniture and sleep in the bed!!! That is SO feline - I love it! ha ha ha

Reely yoo wuz lucky yer furrst peepull abandoned yoo cuz yoo got a much better furefurr home. Mean peepull like dat shouldn't haf poodins at all. We bofe like to talk to our mum too, and when she talks to us, we allus answer her.

Hi BB! It was great getting to know you better! We're glad your beans took you in.

Whew, we'z finally catching up on our reeding. Yoo guyz all found a grate fureffur home. Our mom talks to us alla time, sumtimes Zippy tells her to shut her pie hole but we don't think mom unnerstands. Either that or she's slitely dense, eh, that woodent surprize us any.

Like my girlfriend cat DaisyMae Maus, you were very lucky to be rid of your first people! And your mom and dad were fortunate to get you! You're a beautiful queen, and both 'sheba and I enjoyed reading more about you. Neither one of us really remembers our first five days since they were so long ago.

Donny and Marie and Casey said...

BB - I always admired your alpha cat loveliness and I am so happy to learn lots more about you. I need your guidance to learn to be an effective alpha cat. Right now, I'm not very effective.