As lots of youkitties know, Mickey and Marilyn are head over heels for each other. I think they make a great couple, don't you? Here's the picture Marilyn wanted me to post for Mickey today. She calls it it her Come Hither Look. I don't know exactly what that means, but anyhow.

And if you biggify the picture, you can get a better looksee. 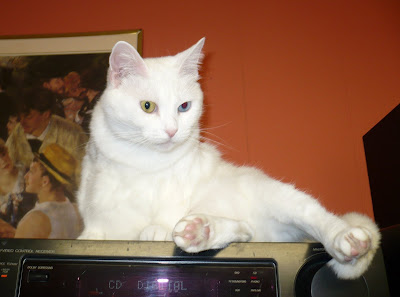 Here's some things you might not know about Marilyn MonREOW:

1. Well, duh, I'm sure you've guessed this one -- she was named after Marilyn Monroe. 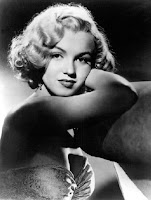 I kinda see a resemblance, don't you? Except I don't think the bean Marilyn had one blue eye and one gold eye...

2. Marilyn showed up at Momma and Daddy's as a stray kitty outta the blue, just last year. They were taken with her sweetness and her beauty, and after they made sure she didn't have no other beans anywheres else, they brought her in and made her a housekitty.

3. Marilyn's a superduper lapcat. Momma calls her a lap fungus. She cuddles with Momma and Daddy a lot, especially with Momma 'cause Momma's a writer and spends lots of time sittin' in front of the 'puter. So Marilyn sees what Momma likes to read and write, and because of that, she's gotten really into poetry and booky stuff.

4. Marilyn's a kissyface. She loves to kissy, kissy, kissy. Beans, anyway. She mostly keeps her distance from Brainball and Dorydoo, but she likes me pretty good and we two play chase, and sometimes we even play pawsies under the doors. And I know she'd kiss Mickey Mantle. She swoons at the very idea.

5. Marilyn's half-deaf, on her blue-eyed side. That means she startles kind of easy, but other than that she isn't a high-strung kitty at all. She's laid back and easygoing.

6. Continued from #5 -- Marilyn doesn' t have a shy bone in her body, and when beans come over to visit Momma and Daddy, she's the first of us Ballicai to check 'em out. Usually she winds up rubbin' all over 'em, purrin' like a chainsaw, and wanting to cuddle in their laps.

7. Momma keeps a picture up of her and Marilyn on her writing bloggie, in the "About Me" section.

8. Marilyn loves bras. She loves to rub all over 'em and play with 'em and wrestle with 'em, and sometimes she rabbit-kicks 'em.

9. Marilyn loves all kinds of food, but she especially loves stinky goodness. Because she's half-deaf, she either doesn't talk much at all or she talks really, really LOUD. For Marilyn, there ain't no in-between. And when Momma breaks out the stinky goodness, Marilyn really, really gets to talkin'! Of course, I do, too. .. I'm a Meezer, and I talk all the time. And Dorydoo starts squeakin' (she don't meow, she squeaks), and Brainball sometimes says stuff, too. When it's Stinky Goodness Time, Momma calls us the Ballicus Tabernacle Choir.

10. Marilyn's kinda petite and curvy at the same time -- she's small-framed, has itty bitty paws, and weighs 10 pounds. She has medium-length hair -- not short hair like me and Dorydoo and not long hair like Brainball, but in-between. She loves to be brushed, which is good 'cause she sheds a LOT. And her fur's really silky. Momma calls her a Powderpuff Cottonball Cat.

11. Marilyn's an incredible jumper. She and Dorydoo are both what Momma calls Arboreal Kitties. Dorydoo's the best jumper, but Marilyn's darned close, and she can get anyplace she wants to go, like way up on top of the stereo receiver or on top of the fridge.

12. When Marilyn ain't cuddlin' in laps, she likes to snooze on soft squishy places. She especially likes clean laundry, the body pillow on the bed, or Momma's fuzzy yellow jellybean thingie she keeps in her chair.

Even if Marilyn is really, really girly, she's a superduper sister, and I'm right proud of her.
MAOed by MaoMao at 5:05 PM

Donny and Marie and Casey said...

You are so pretty!

Marilyn is a definite looker, but from what you tell us about her, she is a sweet kitty as well! She looks like Buddy, who we spondered at Best Friends, so we are partial to her. I'm glad she is a happy girl and in love!
Purrs!

Dearest Marilyn,
I so enjoyed reading about you this evening. I can't help but admire you more and more.
The photograph is really quite beautiful. Your eyes are like jewels.
We're so fortunate to have brothers who love us.
Yours--Mick

Hello everyone, this is Marilyn. MaoMao wrote such a nice post about me, and I really appreciate it. He's a great little brother.

Hi, Marie! Thank you. And wow, you're beautiful! I like your name, Marie the Defender. You sound very strong and courageous in addition to being lovely!

Hi, Parker! Thank you so much. I'm glad I look like Buddy, who sounds like such a special kitty. And yes oh yes, love is indeed grand!

And my dearest Mickey, I'm so glad you enjoyed reading about me. MaoMao was so nice to share. You and I are indeed lucky to have such sweet brothers -- MaoMao and Jeter are fabulous fellows.
Thank you, my darling, for your beautiful words about my eyes. I loved reading about you, too. You make my whiskers curl, you are such a handsome and accomplished mancat. Your big cheek pads make my heart go pitter pat.
Here, my heart, are words from Shakespeare that speak to how I feel:
"My bounty is as boundless as the sea, my love as deep; the more I give to thee, the more I have, for both are infinite."
Your loving Marilyn

Marilyn is a knockout! I love her two-color eyes. And Mao, it is so sweet how proud you are of your sister.

ps: I might have to see if my Mommie will let me play with her bra. It sounds kind of fun.

Marilyn sure is pretty. Um, could you maybe post a tummy photo? I think I'd like that a lot. If things don't work out with Mickey, um, how do you feel about grey and white mancats? ;)

You are gorgeous, Marilyn. I can see why you call that your "come hither" look. I wouldn't be able to resist it. It was great learning more about you from MaoMao's TT.

Marilyn, we really really love you.
We are glad that you are friends with your brother MaoMao because he is a good brother.
We are so glad we know all of you kitties and we saw the great picture of your mommie and Marilyn.
We love it!

Hi! This is Marilyn commenting again. Thank you so much for your sweet comments. I'm really enjoying blogging, for I'm meeting so many nice kitties, as well as my love, Mickey ***purr***.

Thank you, Daisy! You're a knockout yourself. I can certainly see why Skeezix loves you so much, as pretty and smart and sweet as you are! And I can't recommend highly enough playing with bras. You would love them. I get all drooly and happy and even rabbit kick them. Momma gives me hers to play with before she puts them in the wash.

Thank you, Earl Gray, *blush*. I will get Momma to get a picture of my tummy soon. My heart belongs to Mickey, but you are a very sweet mancat, and very handsome, too.

And thank you, Caesar and Prinnie for your sweet words about me, and about the picture of me and Mom! You are beautiful kitties. I'm glad MaoMao and I get along well, too. He and I have very different purrsonalities, but he's funny and cute and makes me laugh. And he's still a little boy so I suppose he brings out my maternal instincts.

Hi, Kimo & Sabi! This is Marilyn commenting, and *blush*, thank you. You are both very handsome fe-lion fellows.

Marilyn sure does know how to show off her feminine charms. I could probably learn a thing or two from her. I'm more of a tomboy myself. I wonder what kind of girl Pablo likes?

Marilyn, you are a doll! Your eyes are truly stunning. MEeeOOWWW! Chairman Mao, you make a great brother.
Purrs,
Mr. Chen & Ollie

Hi, Phoebe and Mr. Chen and Ollie! This is Marilyn. Phoebe, you're a beautiful kitty, and MaoMao loves to look at pictures of you and Monica. MaoMao likes girls who are more tomboyish. Maybe Pablo does, too. MaoMao and I get along well, but of all us Ballicai, he's closet to Brainball, our big Alpha Cat, and she's a rough and tumble tomboy. Dorydoo is a tomboy, too, and she's also a kitty nerd. I say that in the nicest possible way, as in Dorydoo's a brilliant, rocket-scientist type girlkitty.

Hi, Mr. Chen and Ollie! You've got a great blog, and welcome to the Cat Blogosphere. You two are such cute fellows! And you look like close and loving brothers.

You're right to be proud of Marilyn MonREOW. She's downright pretty, and it sounds like she's got a great personality, too!

Hi Marilyn, It's good to meet yoo. We love yer eyes speshully, but yer an all round beeyooty.We can see why yer proud of her.
We wuz wondering if theer may be anuvver wedding coming up sometime in the fyoocher.

Marilyn is beautiful! I enjoyed learning more about her. I think being a lapcat is an excellent trait. I'm a lapcat too! ;) Too funny about your mom calling you the Ballicus Tabernacle Choir!

Hello, this is Marilyn. Thank you, Lux -- you're so nice, and handsome, too.

And thanks, Eric and Flynn! *blush* and *purrrrrrrrr* at the thought of Mickey asking me to be his bride.

Hi, Dragonheart! You are such a regal and elegant kitty. Isn't being a lapcat marvelous? Cuddling is one of life's finest pleasures.

Marilyn is very pretty and your very handsome.

Chairman Mao here! Hi there, Ariel, and wowie, thanks so much! I'm so glad you think I'm handsome. You're a bee-yootiful little girlkitty, and I'm so happy that you visited my bloggie!

Kittyhugs and purrs from MaoMao (and slow blinkie eyes, too)!